Is Your Book a Movie? (Part 2) A crash course in book-to-screen adaptation

This blog is part of a series. To see Part 1 and find out what Hollywood wants your story to have, please click here.

Is your book a movie? Should it be? How do you get from here to there-and what’s in it for you? Fasten your seat-belt, and let’s rip through this…

TED’s Director of Development, John Robert Marlow, presents a crash course in determining if your novel has cinematic potential. 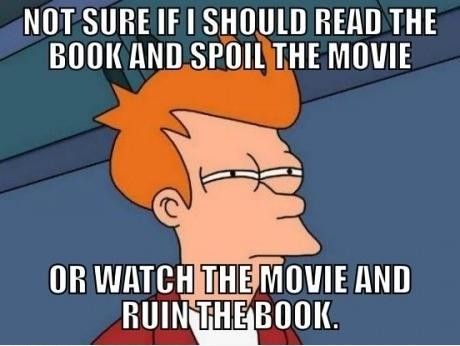 Most books are not movies.

The majority, however, could be movies, if carefully adapted.

There are several routes to take here.

If your tale is still in manuscript form, you can alter the story to render it more cinematic by incorporating or emphasizing the elements Hollywood is looking for. (See these elements here.)

If you’d rather see your manuscript published the way it is, or if your novel has already been published-you can adapt your story by writing (or commissioning) a screenplay based on the book. In fact, you might want to consider this option even if your story is already cinematic. The reason is simple:

Nothing conveys a story’s cinematic potential better than a well-written screenplay.

The purpose of a book is to be read and enjoyed for what it is.

The purpose of a screenplay is to put a movie in the reader’s head-to help the reader visualize the finished film and say,

“I want to make this movie, I want to see it on the screen, and I will pay money to make that happen.”

Chris Lockhart is Story Editor at William Morris/Endeavor, one of the few Hollywood super-agencies; before that, he was Executive Story Editor at ICM (another Hollywood powerhouse). His job is to read and consult on scripts intended for top-end clients including Mel Gibson, Denzel Washington, Steve Martin, and others.

In his experience, every player in Hollywood asks one question after reading a story: “Is this a movie?” If the answer is yes, you’ve got a shot at selling your tale. If the answer is no, you probably don’t-not to that buyer, at any rate.

When approaching Hollywood, it is essential that your story be as much like a movie as possible-and the best way to do that is to present it as a screenplay. A book raises questions:

By reading the book, and not a screenplay, those in charge may see that the plot needs to be simplified, or the story needs more action, or less action, or a more sympathetic hero, a stronger villain, fewer characters, more characters, a stronger love story, a higher body count, a three-act structure, a midpoint, stronger character arcs, and so on. All of this can potentially kill the project.

By presenting a screenplay instead of a book, you avoid such complications, allowing the prospective buyer to focus on that one, all-important question: is this a movie?

And there’s another very important thing to consider:

Simply put-and generally speaking-screenplays pay better than novels (and also better than mere “film rights”). The average advance on a first novel is in the neighborhood of $15-20,000. The average selling price of a spec screenplay by an unsold writer hovers somewhere between $300,000 and $600,000.

That’s the average price, mind you, not the top end (which, on rare occasions, can top $5 million). And screenwriters often get bonuses when the picture is made, sequeled, adapted for television, and so on.

There are other considerations. Novels run 300, 400, even 500 pages of densely-written text. Screenplays run 100-120 pages of fairly light text. So even if the two formats paid the same overall-which they don’t-the per-page rate for screenwriting is much higher.

The up-front payment on the book side typically comes in three installments, the last being upon delivery and approval of the final manuscript. Taken together, these payments constitute an advance, which must be earned back (via royalties) before you see another dime.

If the book doesn’t sell well enough for the publisher to recoup the advance from royalties, you receive no further payment. If the book goes out of print, you can probably get the rights back.

Spec script payments are typically broken down into several installments. The first comes when the contract is signed, and is almost always six figures. Later payments come as certain production milestones are met, with the entire purchase price being due no later than the first day of principal photography.

If your script is purchased but no movie is made, you keep any payments you’ve received, but will not receive the full price. You may-or may not-be able to get the rights back.

However, there are no billionaire screenwriters for a reason.

Again, and on average, screenplays pay better than novels. At the top end, however, this ceases to be true. This is so because the purchase price for a screenplay has an upper limit: once the film has wrapped and bonuses (and so-called “net profits,” if any) have been paid, the well runs dry. For you, that is; the studio makes money forever.

In the book world, there is no ceiling: every copy sold puts more money in your pocket. To match this kind of cash machine, the film studio would have to agree to give you “gross points,” meaning a percentage of the film’s gross profits (before the studio deducts so many questionable expenses that the hit of the summer seems to have lost money-on the books, at any rate; this is where “net profits” get such a bad name).

People like James Cameron and Russell Crowe get gross points; writers do not. Doesn’t matter if you write the next Titanic-you will never (as a writer) be paid a percentage of the gross.

Having a book and a screenplay opens up new possibilities.

Interest in either will bump up interest in the other. The actual sale of either will make sale of the other more likely. If things go astonishingly well, a savvy agent might be able to play studio interest against publisher interest and jack up the price on book and screenplay to ridiculous heights. (This doesn’t happen often, but it happens.)

If the book is published and does well, the screenplay is more likely to be produced (even if it’s already been purchased and has stalled at the studio). If the book didn’t sell to a publisher, but the screenplay does sell, publishers will suddenly become interested in the book. (The reverse is also true: if the script doesn’t sell, and the book sells high, the screenplay may get a second life.)

If the book was published but did poorly, a successful film will resurrect sales, and almost certainly make the book an instant national bestseller (which, in turn, may earn you far more than the film does, and launch a sluggish writing career). A successful film will make studios want your next movie, and publishers your next book.

Looking for guidance in turning your book into a screenplay? We have editors on staff who specialize in helping authors with the process of adapting a book to a screenplay, ghostwriting, and complete screenplay adaptation.  Please contact Ross Browne at the Tucson office for more information.

About the Author: John Robert Marlow

John Robert Marlow is an editor, novelist, screenwriter, and adaptation specialist. His adapted screenplays have twice been honored by the Academy of Motion Picture Arts & Sciences (the Oscar people). He’s also the author of Make Your Story A Movie: Adapting Your Book or Idea for Hollywood (St. Martin’s Press/Macmillan), currently being revised for a second edition.