A Game of Thrones by George R.R. Martin A “first 50” review

George R.R.Martin’s A Game of Thrones turns 20 this month! In honor of twenty years in print, and a hugely successful twenty years at that, here’s a breakdown of the first 50 pages of the book that started it all.

Aside from the prologue, the first 50 pages of ‘A Game of Thrones’ is divided into five chapters, each written from the point of view of one of the novel’s main characters. While shifting POV can occasionally lead to confusion, giving each character a clearly titled chapter solves the problem admirably.

We open with three men in a wintry forest, and it soon becomes clear they’re part of a scouting party. The leader, a young lordling, is dismissive of his companion’s superstitious fears that once night falls, they may be prey for some unnamed evil believed to occupy the forest. In the next nine pages, they discover an abandoned camp, where the lord falls prey to terrifying wraiths with cold blue eyes, then rises as one of them and falls upon the youngest of his companions. It’s a frightening and exciting chapter which shows us that magic and monsters, while relegated to the realm of mythology, are in fact lethally real.

The first chapter opens with the execution of the third and only surviving member of the scouting party—he apparently survives the prologue long enough to flee and desert the Night’s Watch, an order of men responsible for defending the realm against the forests of the North. This chapter is from the POV of Bran Stark, whose father Eddard (Ned), a lord of the realm, acts as executioner. This chapter provides a brief and welcome lull from the fast-paced fear of the prologue and introduces us to some of our major players, including Bran’s brother Robb and their father’s bastard son, Jon Snow. The mystery picks up again when Jon finds six motherless direwolf pups in the snow, one for each of Ned’s children—the sixth, an albino pup, Jon claims for himself. 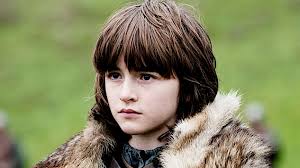 Bran Stark as portrayed in the HBO series adapted from Game of Thrones and the Song of Ice and Fire series.

The next chapter belongs to Catelyn, Ned’s wife. A southerner by birth, this chapter gives us an outsider’s perspective on the North and its people—cold and hard, but mostly honest. It’s here the story’s primary plot finds its direction (the material of the prologue serves as a sub-plot throughout the novel). Robert, the king of this realm and a close friend of Ned, is coming to visit. 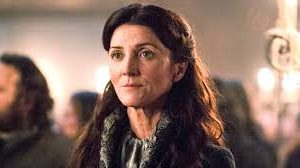 Catelyn Stark as portrayed in the HBO series adapted from A Game of Thrones and the Song of Ice and Fire series.

The next chapter is that of a girl named Daenerys, and it’s here that Martin gives us a little political background. Daenerys and her brother Viserys are the only surviving members of the family that reigned before Robert (in fact, it appears the Roberts overthrew them—and not that long ago, either). By giving us needed information in the form of dialogue and scenes, Martin holds our attention despite the fact that Daenerys is living well apart from events in the North, somewhere across the water and well out of Robert’s reach. This chapter is firmly stitched onto the main story when it becomes apparent that Viserys (who’s petulance borders on insanity) intends to wed his sister off in exchange for an army, which he’ll use to retake his throne and his birthright. 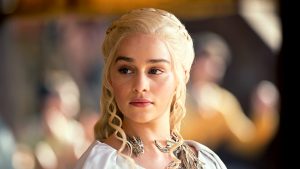 Daenarys Targaryen as portrayed in the HBO series adapted from Game of Thrones and the Song of Ice and Fire series.

In the next chapter (Ned’s), Robert arrives and we learn the purpose of his visit in the north: he wants Ned to ride south with him and become the Hand of the King—the previous Hand died suddenly, leaving a power vacuum that Robert wishes to fill as quickly as possible. 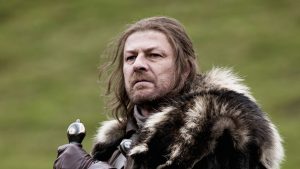 Ned Stark as portrayed in the HBO series adapted from Game of Thrones and the Song of Ice and Fire series.

We finish off the first fifty pages with a Jon chapter. Learning that his father is leaving and knowing Catelyn despises him as a reminder of Ned’s infidelity, Jon makes the bold decision to go north and join the Night’s Watch—thus neatly converging all plots and subplots within one family. 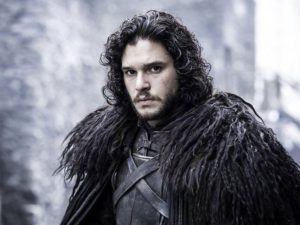 Jon Snow as portrayed in the HBO series adapted from Game of Thrones and the Song of Ice and Fire series.

Martin’s work is masterful—a swift pace and plenty of action are used to introduce the novel’s three key points of conflict (the Night’s Watch, Daenerys, and Ned’s becoming the Hand). Chapters from varying points of view allow us to cover more physical ground, giving us a unique bird’s eye view of the realm and its politics. The prologue is a little out of place, as Martin doesn’t directly address the weights again until much further on in the story, but everything in between moves at a pace brisk enough that this doesn’t really occur to the reader until after the fact.

All of Martin’s characters are compelling, and giving them a chapter apiece allows us time and space to become familiar with each—very necessary, since Martin’s cast only continues to expand over the course of the book (and the series). The strongest selling point, however, is a self-sufficient plot that keeps its fantasy elements to a bare and practical minimum—the weights are intriguing, to be sure, but it’s lordly power-play, the game of thrones, that most entices the reader. By keeping the magic to small, measured doses, Martin maintains an air of suspense that many fantasy novels risk losing within the first 50 pages. 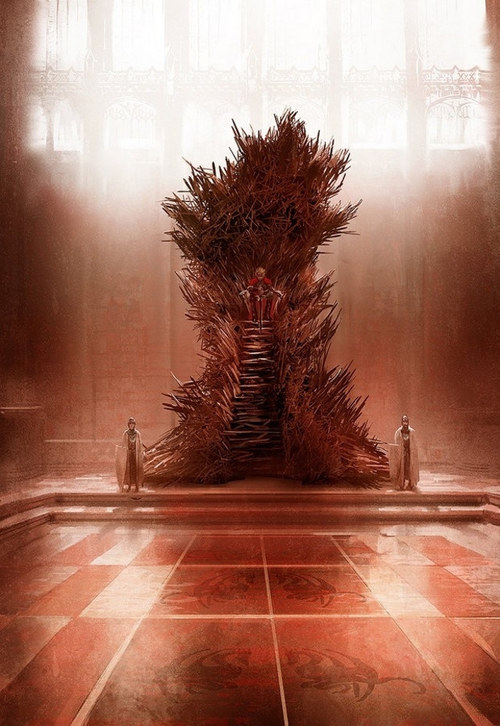 A depiction of the Iron Throne by artist Marc Simonetti

More on Game of Thrones:

George R.R. Martin’s blog post about the 20th anniversary of the publication of A Game of Thrones (here)

A Song of Ice and Fire series (here)

Looking for guidance or feedback? We have editors who specialize in everything from plot architecture to character development, world-building to dialogue that sparkles. Please contact Ross Browne at the Tucson office for more information.