Our Book: Self-Editing for Fiction Writers

by Renni Browne and Dave King 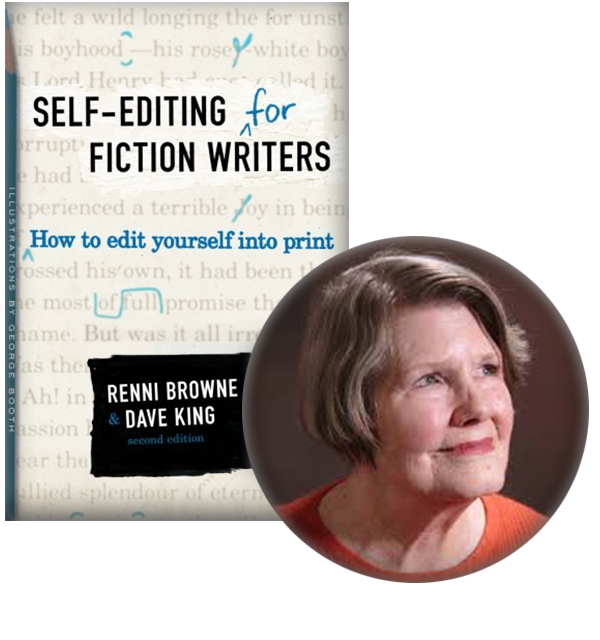 Listed in the Los Angeles Times as one of six indispensable books for writers, Self-Editing for Fiction Writers, by Renni Browne and Dave King, has been a highly respected guide for writers of fiction (and narrative nonfiction) since its initial publication in 1993. Since then it has been one of the bestselling books ever written on the topic of writing craft, going through many printings and a revised second edition. Literary agents consider Self-Editing for Fiction Writers to be especially relevant in today’s publishing environment, where in-house editing is rare.

Renni Browne brought decades of experience acquiring and editing some of publishing’s most respected authors and distilled much of what she learned into guidelines writers can use to strengthen their narrative voice and avoid amateurish habits that typically compel agents and acquisitions editors to pass on a manuscript. Dave King added guidance he’d learned from years of working at The Editorial Department and then took things a step further by shaping everything into a self-help book complete with exercises, checklists, and examples—many straight from books that Browne and King edited—that show how the recommended techniques can be implemented to best effect.

The end result is a modern classic on writing craft that routinely earns five stars and has drawn high praise from literary agents, publishing editors, and thousands of writers worldwide.

The only practical guide to the craft of writing that is both inspiring and essential.

I would have to say that this book should be a must for all aspiring authors. Even, dare I say, to many established authors who make many of the mistakes that this book talks about.

My students–including the published novelists–ought to read Self-Editing for Fiction Writers once a year, the Show and Tell chapter even more often.

An entire book on improving what you’ve written is Self-Editing for Fiction Writers, which comes from professional editors who know their stuff.

A superb tutorial for anyone wanting to learn from pros how to polish fiction writing with panache.

Chapter 1: Show and Tell
How, why, and when to implement the most oft-repeated advice for writers

Chapter 2: Characterization and Exposition
How much and when to fill your readers in

Chapter 3: Point of View
How to choose and handle character perspective

Chapter 4: Proportion
How to balance elements of your story to maximum effect and for best pacing

Chapter 6: See How It Sounds
How to make your dialogue sound natural

Chapter 7: Interior Monologue
How to handle your characters’ thoughts

Chapter 8: Easy Beats
How to make the most of movements during a dialogue scene

Chapter 9: Breaking Up Is Easy To Do
How to use paragraphing and give and take to improve the flow of a scene

Chapter 10: Once Is (Usually) Enough
Once Is Usually Enough. How to spot (and fix) unintentional repetition and redundancy of effect. (Also how and when to use repetition for deliberate effect.)

Chapter 12: Voice
How to bring out a distinctive narrative voice

An early seafaring novel by a celebrated nineteenth-century novelist begins:

It was the middle of a bright tropical afternoon that we made good our escape from the bay. The vessel we sought lay with her main-topsail aback about a league from the land and was the only object that broke the broad expanse of the ocean.

Call me Ishmael. Some years ago—never mind how long precisely—having little or no money in my purse, and nothing particular to interest me on shore, I thought I would sail about a little and see the watery part of the world.

The opening of Omoo raises some intriguing questions—Why does the narrator need to escape from the bay? Whom are the narrator and his companions escaping from?—and gives a clear and vivid picture of the waiting ship. The opening of Moby-Dick is irresistible. What makes the difference?

The answer, of course, is voice. And judging from these two Herman Melville novels, even the greatest voices develop over time. Certainly when he wrote Omoo Melville had not yet found what John Gardner (in On Becoming a Novelist) has called “his booming, authoritative voice.” In the Moby-Dick opening, Gardner points out, the rhythms “lift and roll, pause, gather, roll again.” The authority is unmistakable. ...

A strong, distinctive, authoritative writing voice is something most fiction writers want—and something no editor or teacher can impart. There are, after all, no rules for writing like yourself. Voice is, however, something you can bring out in yourself. The trick is not to concentrate on it.

But though you shouldn’t consciously work on your voice as you write, there is a way to encourage it when you get to the self-editing stage. Start by rereading a short story, scene, or chapter as if you were reading it for the first time (rather as you would read in self-editing for proportion). Whenever you come to a sentence or phrase that gives you a little jab of pleasure, that makes you say, “Ah, yes,” that sings—highlight that passage in a color you like (we use yellow) or underline it. ...

Then go through and read aloud all the sentences you highlighted or underlined. Don’t analyze them for the moment, just try to absorb their rhythm or fullness or simplicity or freshness or whatever made them sing to you. What you’ve been reading aloud will represent, for now, your voice at its most effective. And making yourself conscious of it in this mechanical way will strengthen it as you continue your work.

Now read through the same section again, and when you come to those passages that make you wince or that seem to fall flat, just draw a wavy line under them. Go back and read consecutively all the passages you didn’t like, and this time try to analyze what makes them different from the passages that sang to you. Is the writing flat? Strained? Awkward? Obvious? Pedestrian? Forced? Vague or abstract?

If flatness seems to be the problem, take a look at the surrounding sentences and see if they don’t all have the same structure. Too many straight declarative sentences in a row, for instance, will flatten out anyone’s writing. If the problem is abstraction or vagueness, rewrite for specificity. “A man walked into the room and ordered a drink” hasn’t one fifth the bite of “A dwarf stepped up to the bar and ordered a Bloody Mary.”

If the passage seems obvious, check for explanations—whether in dialogue, interior monologue, even narration—and cut or rewrite accordingly. And if the writing seems strained or forced or awkward, try reading the passage aloud, listening carefully for any little changes you’re inclined to make while reading. More often than not, those changes will be in the direction of your natural voice.

If you do this exercise often enough, you will develop a sensitivity to your own voice that will gently encourage the development of the confidence and distinction you’re after. And this is as true of character voice as it is of narrative voice.