Skip to content
Home/RDB, The Writer’s Craft/Characters: Making Them Real
Previous Next

Characters: Making Them Real Tips on making your characters convincing and memorable from editor Renni Browne

Most fiction writers begin a novel or short story by coming up with characters firmly in mind and then building a story around them—or by coming up with a plot and then building characters to play the various roles it requires. It’s not really that simple, of course: an unruly character may at some point dictate a change in your plot, or a good plot development may dictate a change in one or more of your characters. But you’re still likely to begin the writing process with your characters or plot worked out in your mind, at least to some extent.

This article is intended for those of you who have started with a plot and are now ready to develop your characters, as well as those of you who are trying to build a character from scratch at any stage in the process or strengthen a weak character.

Every fiction writer hopes to create characters who come alive to the reader, who elicit strong emotions—positive or negative—who make the kind of impact on us that really interesting people in our lives make. Characters we won’t forget, characters we want to spend time with.

How do you set about making them real?

Let’s say you have a main character, a man, whose actions in your novel you’ve pretty much worked out.

First, you have to get to know him. Start by giving him a name—a first name, which you can always change. (You can’t give him a last name until you know his ethnicity.) Let’s say his name is Tony.

Figure out what he wants.

The most important thing you need to know is what Tony wants. Square one: A main character has to want something, and want it badly. Whatever that something is, if you make it important enough to Tony, it will be important to the reader. You’re the writer. Your job is to not give it to him and keep on not giving it to him all the way to the end of the novel—at which point you may give it to him but may not. Depends on your plot. You might even say that the plot and subplots grow out of your answer to this question: what does Tony want, and why can’t he have it? Your scenes grow out of his struggles to get what he wants, and the people and circumstances that keep him from getting it. 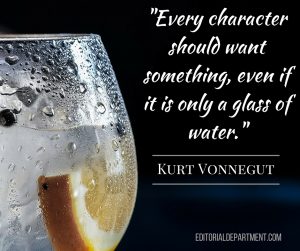 Let’s say your plot (already sketched out) is a legal thriller. You give some hard thought to what Tony, your lawyer-hero, wants and decide he desperately wants to win every case he can while seeing justice done. Unfortunately, these two goals clash more often than not.

In any case, you know what he wants and why he can’t have it. Write it down, spew it out on your computer, don’t try to be concise. Embroider it, add details, fill it out. It says a lot about Tony that he’s the kind of person who has an impossible goal in life.

Give him a background.

Let’s say he’s Jewish and call him Tony Seibert. If asked “Who are you?” he’d say, “I’m a lawyer.” Fill in some details. Ask Tony if he’s a practicing Jew, if religion means anything to him or if he just shrugs it off. Let’s say the only time he ever hits a synagogue is for weddings and funerals.

Give him a personality.

What’s his temperament (be thorough)? Does he have a sense of humor? Fast or slow speech? Impulsive or not? How smart? Ethical? How competitive? What are his temptations? Limitations? Easily hurt or does he have a tough hide? Is he guarded or open? Or guarded until somebody is interested in him, then he’s open?

Hmmmm. For illustration purposes, let’s say he has a terrific sense of humor (this means writing dialogue for him with plenty of snap and bite) often turned on himself, speaks fast (often interrupting himself or others), is impulsive, super-ethical within the limitations of his work, really smart….You get the idea.

Give him physical presence.

What Tony looks like will create expectations in the mind of the reader, so use this power wisely. You may find helpful a rough draft in which you overdo it — pouring out even minute details of clothing, facial features, hair, body—and then pare down and down until you have a description that feels right. In describing his physical presence be sure to include how he moves.

Let’s say however you get there, you come up with a character you like—or love, or loathe. The point is, the character seems real enough to elicit an emotional response. How do you convey what makes Tony special to the reader? How do you put him over?

Here’s a method that works for enough writers to be worth a try. Just as you’re about to drift off to sleep, fantasize about Tony. Imagine him in highly specific detail: what he’s wearing, what he’s doing, his face (feature by feature), hair, body. Talk to him—at first generally, then intimately–either as another character or as yourself, whichever feels more comfortable. Then put him in scenes. If your mind gets off the subject, bring it back: the idea is to fall asleep with Tony.

When you wake up in the morning, go straight to your computer. (You can make a pit stop at the bathroom, but don’t even make coffee. If you smoke, you can light a cigarette.) Start typing stuff about him, giving no thought whatsoever to how it’s coming out, or to what words you’re using. It doesn’t even have to be sentences, just keep typing. It can be but doesn’t have to be dialogue, interior monologue, or stream-of-consciousness. Type even if it’s gobbledygook. Something will come. Type it.

You’d be surprised at what you might learn. If you fantasized about Tony just before going to sleep, the chances are that you dreamed about him. Your subconscious could make a powerful contribution to his characterization.

Looking for guidance in making your characters more dynamic, memorable, and book-worthy? We have editors on staff who specialize in helping authors with character development, dialogue, and strengthening  character-based subplots.  Please contact Ross Browne at the Tucson office more more information.

By Renni Browne|2019-06-17T19:31:02+00:00|RDB, The Writer’s Craft|Comments Off on Characters: Making Them Real Tips on making your characters convincing and memorable from editor Renni Browne

About the Author: Renni Browne

Renni Browne has been an editor for over fifty years and founded The Editorial Department in 1980. She is even better known as the coauthor of Self-Editing for Fiction Writers, its first edition published by HarperCollins in 1991 and still a best-selling craft book for writers. Interested in working with Renni as your editor? Please click here.