Coming Out of the Fanfiction Closet Part One: The fanfiction writer

Remember all the furor about E.L. James’s bestselling trilogy Fifty Shades of Grey and its unabashed origins in Twilight fanfiction? That series started a healthy debate among writers and fans alike about the concept of fanfiction. Some of us read it, others hate it, and then there’s a number of us (more than you might think) who actually write it.

First off, what is fanfiction? Simply, it’s a story using a pre-existing setting and cast of characters, and can be based on another writer’s fictional world (most common) and occasionally on real life celebrities. People have been telling fanfiction—and spin-offs, and based-on-the-story-of’s—for millennia. When Virgil wrote The Aeneid, his title character was from Homer’s The Odyssey. Dante wrote Bible fanfiction (with a dash of Virgil) when he penned the Divine Comedy, as did John Milton when he wrote Paradise Lost. More recently, books published as sequels or zombie-homage to Jane Austen’s novels definitely fall into the category of “fanfiction.”

In today’s literary world, though, fanfiction is still something of a joke. “Real” authors don’t write fanfiction. Maybe they start with short stories in literary magazines, or they get an MFA, or they write four novels that languish in a drawer before finally writing The One That Gets Published. In this painful vacuum of their own originality, writers are supposed to figure out how to craft meaningful plots with multi-faceted characters, fleshed out with perfectly realistic dialogue.

But wait a minute… a lot of fanfiction fits that description. Well-developed original characters. Subtle manipulation of an entire fictional universe. Imagination galore. Deep, meaningful, symbolic—I’ve encountered many a fanfic that qualifies.  So where is the boundary between “real” writing and fanfiction?

Fanfiction for its own sake

One of the strengths of, say, Harry Potter fanfiction is that it exists out of pure love for the world created by J.K. Rowling. Fan stories are not written for profit, and most fan sites encourage disclaimers, for example:

“Disclaimer: The Harry Potter series and all characters therein are the creation of J.K. Rowling. No profit is being made from this fanfiction and no copyright infringement is intended.”

It’s hard to imagine a fanfiction writer who started for any reason other than a passion for reading, for writing, for the world of Harry Potter (or Star Trek, or The X-Files…). In this way it has a sort of integrity, and doesn’t pretend to be anything other than writing: fanfiction is not a product, not a profit, not packaged and sold, not beholden to sales analysis and contract negotiations. It exists for the love of the story.

Criticism: when haters can help 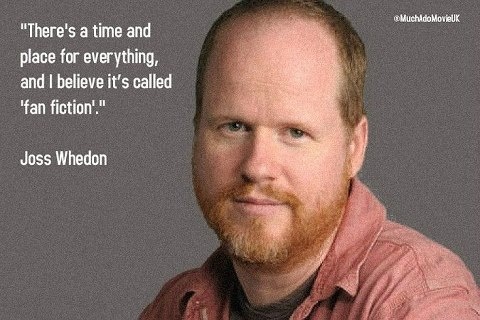 Making the leap from writing fanfiction to becoming a published author of an original work is a massive one. Most fan writers have no desire to be published. But for the ones who do, I contend that writing fanfiction is one of the best ways to cut your teeth on style, pacing, language, and plot before trying to write an original story. Let alone submitting to the closed circle of the publishing industry or the ferociously competitive self-published market.

When fanfiction is posted online, readers leave reviews with praise, constructive criticism, flaming hate, all things that contribute to the development of the writer. That, of course, is the key: having readers. It’s not nearly such a big deal to send your original work to an agent, publisher, or the Kindle store when you’ve already had novel-length fanfiction posted and read by other people. Even rejections or bad reviews don’t hurt so much. In the scheme of a fan-writing career, there are plenty of positive comments for every one negative one. Fanfiction offers the opportunity to have an ongoing rapport with readers and hone the craft of writing for an audience.

There are, of course, plenty of other opportunities for such feedback: writers’ groups, classes, workshops, online writing forums like Absolute Write. But in terms of sheer scale, there’s nothing to compare to the readership of the big fandoms. On the popular website fanfiction.net, there are half a million stories about Harry Potter, and many times that number of readers. For Twilight, almost a quarter million. For other popular series such as The Hunger Games and Lord of the Rings, there are many tens of thousands of stories.

The core of fandom

There are, of course, ridiculous stories that give fanfiction a bad name. For some of us, they were our first exposure to the world of fanfic writing, and (if you’re like me), you thought “My STARS!  Why would anyone write this, let alone read it?” A newbie to fandom will encounter bad grammar, appalling style, Mary Sue character descriptions, unlikely plots and relationships, and the butchering of both original canon and writing conventions. Some fan sites are worse in this respect than others, but any exposure to the genre will turn up more bad fics than good ones.

This amateurishness is part of the appeal of fandom. For the good stories, it’s a chance to shine and stand out in what a publisher might call a slush pile.  There’s no harm in writing rubbish stories (I’ve certainly written some stinkers, lurking in a password-protected file on my computer) or even in posting rubbish stories… the point is the effort and the process.

Fandom is about passion for the story, but it’s also about the passion of honing a skill—be it art, writing, video, or whatever creative medium you choose to express that beautiful obsession with a fictional world. It’s about supporting others in their own pursuit of art.

In public I’ve always said that my debut published novel, The Nightingale, was the first fictional thing I ever wrote. And it’s true in one sense; the book was my beginning attempt at an original work. It wasn’t, however, my first foray into fiction. Yep, I was a fanfiction writer before I wrote a single word of The Nightingale.

The real first fictional work I wrote was a “cross-over”, a blending of two authors’ worlds. In my case, it was J.K. Rowling with Charles Dickens. The result was A Christmas Carol from the point of view of Lord Voldemort. (It was as silly as it sounds.) From there, I wrote several more novel-length fanfiction works in the Harry Potter fandom, and by the time I wrote the third, I had tens of thousands of hits, many hundreds of reviews, and plenty of comments telling me I should go professional.

Fanfiction helped me develop both the skills to craft a readable story and the confidence to submit my own work to strangers. When it came time for me to send my first original novel into the world, I did so knowing (or just thinking) that I had some talent, and it kept me going through rejections and disappointments to where I am today: a published author with three original novels and counting.

That’s why my greatest goal for my writing career is not to make a million dollars or win a literary prize or have my own kiosk in Barnes & Noble. I’ll know I’ve made it when there’s a huge section on fanfiction.net filled with stories about a world that I created.

In Part Two of this post, I’ll talk about fanfiction from the other side of the equation: authors, royalties, copyright, intellectual property, whether having a thriving fandom helps or hurts sales, and a couple famous scandals with fanfiction authors and profits, including Cassandra Clare and E.L. James.

Want to check out our favorite online fanfiction archive? Please visit https://commaful.com/fanfiction/ where you can be a part of an avid community of readers and writers excited to share and discuss fanfiction!

Ready to turn your fanfiction into a real novel? Interested in seeing if your writing can break out of fanfiction and into the published world? We have professional editors that can help you every step of the way. Please contact Ross Browne at the Tucson office for more information.