Skip to content
Home/The Writer’s Craft/To MFA or Not?
Previous Next

To MFA or Not? Editor Andrew Hilleman considers the pros and cons of an MFA in fiction writing

When it comes to the question whether or not you should pursue an MFA in creative writing, you’ll get ten different responses from ten different people.

One guy will tell you only the big programs—Iowa Writer’s Workshop and its ilk—are worth the effort. The next gal will tell you that you get much more personalized attention at smaller, lesser-known schools. Two other fellers will rave about their experiences at Columbia University, despite their recently incurred student loan debt they won’t be able to pay off if they had two lifetimes to do it. Then there’ll be the jaded novelist who didn’t get his/her book published and blame it on whatever supposedly crappy program they graduated from six years ago. And on. And on.

They’re all right and they’re all wrong at the same time. Which is the problem. Whether or not you should get your MFA can’t be answered for you by somebody else. And especially not by the blog of someone you don’t know.

Before that, let’s quash one huge misconception that’s out there: an MFA will make you a better writer.

Only your own hard work can do that. You’re not going to learn anything at an MFA program that costs $30,000 a year that you can’t learn from one of the hundreds of craft books out there that cost sixteen bucks to own forever. 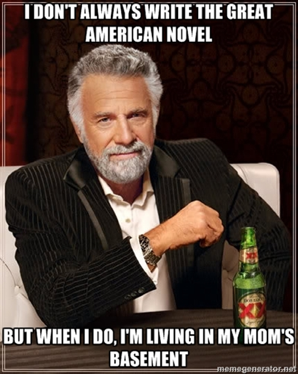 They say writing can’t be taught. That’s true for the most part. I know—I tried teaching it for three years. But it can be learned. And the only way to learn is to write and read compulsively. Which is something you have to do on your own, by yourself, whether you’re in a glitzy MFA program in New York or sitting alone at your basement desk somewhere in rural Montana.

I know a good number of folks who made little to no improvement as writers during their time as MFA students. They preferred to talk about writing at local watering holes six nights a week instead. They’ll post updates on Facebook to tell everyone else that they are, in fact, writing.

Then there’s the folks who expect to improve just because they’re surrounded by other writers. Like good writing is some kind of airborne illness. Then there are the prima donnas. When they’re not instantly declared the next Cormac McCarthy in their first workshop or offered a six-figure advance on their novel about an Eskimo bounty hunter who falls in love with a blind woman by the end of their first semester, they’ll transfer. Or drop out. Or just regress entirely—finishing out the program with a huge grudge and never trying to improve because they don’t think they need to improve. You’ll run into folks like these at every MFA program in the country.

A writing community is one of the things you’ll get from an MFA but beware: this community will likely be comprised in large part by the types of people listed above. They’re great for moral support. They’ll understand your struggles and desires better than any other group of people on the planet, even better than your own family. For the most part, they’ll be knowledgeable and talented. One or two might even inspire you.

But one thing the writing community—including your professors—won’t give you is a work ethic. If you’re not willing to put in the time and effort to actually sit down and write before you start an MFA program, you probably won’t gain those qualities once you are in one.

Of course, an MFA program will demand results: deadlines, thesis progress, workshop material for the chopping block, etc. But if you’re not motivated to produce on your own, you’ll only accomplish what the program requires you to accomplish. Most MFA programs don’t even demand that you finish a novel or short story collection or poetry chapbook–you’ll only need a certain number of pages to satisfy the thesis guidelines.

And once your thesis is finished, you’ll get a degree. But if you think having an MFA on your resume will land you a teaching job, let me warn you otherwise. Teaching gigs are in short supply these days. A good number of my fellow MFA grads sent out sparkling job applications with both classroom and online teaching experience, stellar departmental recommendations, and outrageously positive student evaluations—basically all the bells and whistles.

And where are they now? A couple of them are back working as baristas at independent coffee shops. Which is exactly what they were doing before they got their MFA.

A couple more are adjunct professors, getting paid table scraps with no benefits and no job security. One works at Applebee’s, another at the public library. It never hurts to have a master’s degree, but it won’t guarantee you employment in the field of writing or teaching. Not by a long shot.

Does all of this seem biased against MFA programs? Absolutely. But here is what you get from an MFA program that’s more valuable than anything else and something you won’t get anywhere else:

Lots and lots of time. During my three years as an MFA student, I finished a 170,000 word novel in just under a year and a half. And this after I abandoned my first novel 50,000 words into the process. Plus about nine short stories, many of them too long to be considered short stories. Three of them were in novella territory for certain. That’s a lot of material.

And now that I’m graduated, working two jobs? I barely have time to revise my novel. If I’m lucky I get to sit down and write twice a week. Often that means losing sleep in order to do so.

Which is the case for almost every writer in the world who isn’t James Patterson or J.K. Rowling. We still have to earn a living. Being able to write everyday just doesn’t fit into most adult schedules. But an MFA program will give you that time. It’s a two or three year break from the world. For that reason alone an MFA program is worth serious consideration.

If you decide an MFA is right for you, the only piece of firm advice I will give out is this: don’t pay for it.

Even if you’ve made a fortune betting oil futures and drive a Bentley, don’t pay for it. Plenty of schools out there offer full tuition scholarships and stipends in return for a teaching a section or two of introductory composition. A lot of MFA programs offer these benefits to EVERY student they accept. Look for those places if and when you begin your application search.

An MFA is not for everyone.

A lot of really great writers—big time, award-winning, bestselling authors—don’t have an MFA.

A lot of really bad writers who will never publish anything of substance have MFAs from some of the best schools in the country.

An MFA program doesn’t create good writers. But it will give you the time and support to become one if you’re willing to do the work.

What’s the saying? You get out what you put in? It’s a cliché, right? And avoiding clichés is one of the things you might learn in an MFA workshop, but in this case I can’t think of a better way to word it.

Want help improving your writing without having to earn a masters? We have professional editors that can teach you writing craft tailored to the specific needs of your manuscript. Contact Ross Browne at the Tucson office for more information.

By Editorial Department|2019-06-19T16:34:25+00:00|The Writer’s Craft|Comments Off on To MFA or Not? Editor Andrew Hilleman considers the pros and cons of an MFA in fiction writing