Skip to content
Home/Fantasy, Getting Published, The Editorial Process, The Writer’s Craft, Trends/A World to Remember: More Lessons from the Harry Potter Series
Previous Next

A World to Remember: More Lessons from the Harry Potter Series Principle Four: Create a world the reader will remember

Diagon Alley. The Quidditch World Cup.The Chamber of Secrets. The Cupboard Under the Stairs. Platform Nine and Three-Quarters.

These were not places that existed in our imaginations before we met Harry Potter, but for many readers they are now as real as Times Square.

If we, as writers, look to J.K. Rowling for tips on how to make our own books better (as we have been doing here at The Editorial Department for the past week), perhaps the biggest lesson is this:

Principle Four: Create a world the reader will remember.

The world that Rowling built for Harry Potter is vibrant in its detail and extravagant in its creativity. She takes well-known fantasy archetypes – wizards, trolls, giants, dragons, goblins – and drops them, unexpectedly, into the present day. According to Rowling, we could see them on our modern streets before they disappear back into the fantasy world of castles and quills. 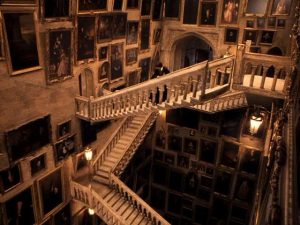 Stock settings – a suburban house, a castle, a haunted forest, a sporting event – become real through their detail. Garden gnomes grumble and swear, staircases move, and butterbeer is the drink of choice. To enter the Ministry of Magic a visitor must find the right telephone booth in London, and to make the Marauder’s Map invisible, you must say “mischief managed.” The Room of Requirement at Hogwarts can be found across from a tapestry of Barnabas the Barmy trying to teach ballet to trolls in tutus.

What’s the point? Harry and his friends could find the Room of Requirement “in the middle of a fifth-floor corridor” with no mention of the artwork on the wall. He could defeat Voldemort without the mannequin that guards the camouflaged entrance to St. Mungo’s Hospital.

But the details of Rowling’s magical world are what make it all so believable, as if there could be a wizarding community here among us that we Muggles know nothing about. And readers who believe are invested in the story and its outcome. What is it that Harry Potter must save? And does it matter? Once you’ve seen a Quidditch match, or eavesdropped on a Care of Magical Creatures lesson about unicorns, it’s hard not to wonder what happens next.

And Rowling knows how to use detail to control the pacing of her story. Harry Potter has a propensity for danger, but he can’t be in mortal peril all the time. The reader needs breathing space-often in the form of humor-and Rowling needs a way to break up some long conversations between protagonists when they are trying to unravel a mystery. A quick look at Common Room hijinks from the Weasley twins, or a bungled Charms spell that should have turned a teacup into a hedgehog, provide lighter moments to help the reader forward. (For more on how Rowling balances her flow of information, read our previous posts on planting seeds early and Chekov’s gun.)

Creative detail is a powerful tool, and one that must be used wisely.

Too much information can wear out a reader as much as not enough. Remember the Blast-Ended Skrewts that Hagrid brought to class in The Goblet of Fire? Imagine if Rowling had stopped the action to explain their origin, danger level, and the full story of how Hagrid acquired them. Better to let the reader imagine certain details, especially related to the stinging end of a magical creature. 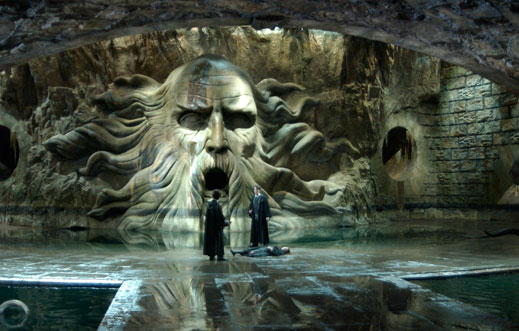 The Chamber of Secrets

So what can we take to our own writing? The reminder that fictional worlds are more than stage backdrops, painted flat against the structural boards of your novel. Taking the time to understand where your characters live, and knowing what parts of that life will engage your readers, can make a good story into a novel that readers will remember. Knowing when to slow your momentum by looking away from the central action is just as critical as knowing how to keep moving forward. And all of it is possible when you really, fully know the world that you have created. To put it bluntly, build a world your reader will remember, but don’t spend 20 pages telling me about it while the plot dies a slow death in the corner.

What other books capture this idea of creative detail? And how are you using this idea in your own writing? Share your thoughts and questions on our Facebook page.

By Editorial Department|2021-05-12T16:36:11+00:00|Fantasy, Getting Published, The Editorial Process, The Writer’s Craft, Trends|Comments Off on A World to Remember: More Lessons from the Harry Potter Series Principle Four: Create a world the reader will remember