Skip to content
Home/Fantasy, Getting Published, The Writer’s Craft, Trends/Heroes Have Hormones: More Lessons from the Harry Potter Series
Previous Next

It’s Harry Potter time here at The Editorial Department, and in honor of the release of the newest addition to the series, Harry Potter and The Cursed Child, we’re looking at what we can learn from J.K. Rowling that will help us in our own writing endeavors. We’ve talked about two different aspects of plotting – holding some information back while still preparing readers for the big surprises. Now we’re ready to look at characterization.

Harry Potter is a classic hero – young, idealistic, brave, and very lucky. He fights his darkest enemy for the first time at age eleven and wins. He hops onto a broomstick and becomes an instant jock. He, literally, slays dragons. And he does it all with modesty and two faithful sidekicks.

If that was the only Harry Potter we found on the page – calmly accepting challenges, coming to irrefutable conclusions, and waging war, he would have been a good bloke to watch for a book, but then the romance would be over. Harry Potter would be boring. A perfect character, one who always has the right answer and never makes a misstep, quickly becomes a caricature.

Instead, we meet a Harry Potter with hormones. Harry is an evolving, maturing young man with plenty of room to grow, and Rowling doesn’t always leave him on his pedestal. He gets angry – sometimes excessively so – and hurts his friends. He procrastinates his homework and completely botches his first date. He chases wrong ideas based on his own prejudices. In short, Harry Potter is as much a typical teenager as he is a magical hero.

“Yeah, okay,” says Harry’s best friend Ron early in The Goblet of Fire. “I’m not stupid, you know.” A caricature hero would recognize the hurt in his friend’s voice, understand the insecurity behind it, and offer some sort of insightful comment to make things right. In Rowling’s hands, though, fifteen year-old Harry does just the opposite. “You’re doing a really good impression of it,” he snaps. And the two friends don’t speak again for some time. Their reunion, and the subsequent ups and downs of their friendship over the years, create a believable bond of brotherly love as well as loyalty. 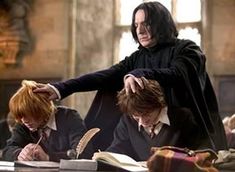 What’s true of heroes is also true of villains.

The ongoing feud between Severus Snape and Harry Potter drives the subplots of most of the books. Rowling’s physical descriptions of Snape are not kind. He “swoops like a bat” in almost every book, lurks in a dungeon, and his “greasy black hair” hangs in sheets around his “sallow” face. Even if he didn’t clearly hate Harry Potter, Snape would not be a man to love. But he does, clearly, despise Harry. Snape is an adult, and a teacher, and so his grudge against the boy hero is particularly infuriating to readers. From the first Potions class, when Snape humiliates “our new celebrity,” through countless points unfairly taken from Gryffindor, to their final face-to-face showdown at the end of The Half-Blood Prince, the enmity between teacher and student simmers, mutual and intense.

And yet, Rowling helps us dig deeper. Snape, however grudgingly, rescues Harry and works with The Order of the Phoenix to overthrow the real villain, Voldemort. Harry snoops into memories that were meant to be hidden and finds that Snape’s prejudice against Harry’s father – and therefore Harry himself – might have been well founded. The reader discovers a moment of sympathy for the bullied boy Severus. Until the man seems to betray it all. Or does he? The question of “whose side is Snape really on” remains unclear, the questions piling on each other without answers, until the very end, when we see Severus Snape still angry, still misunderstood, but vindicated. The layering of this character – at once villain and hero, liar and protector – alone is worth any author’s investment in reading the series, to see how characterization can be done. 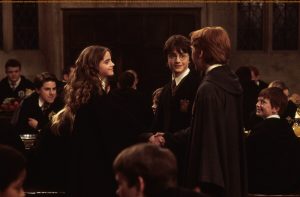 In fiction, characters should do more than advance the plot. They build connections with their readers and explore, from whatever position comes naturally, what it means to be human. And readers connect with them, and stick around for, perhaps, 3407 pages.

What about your characters? Take a careful look at your protagonist and antagonist. Do they show complexity and contradiction, or are they caricatures, existing only to move your plot forward? Can you identify three character flaws in your hero? (Most of us humans have at least that many.) Does the character who drives your conflict show any admirable traits?

By Editorial Department|2021-05-12T16:37:10+00:00|Fantasy, Getting Published, The Writer’s Craft, Trends|Comments Off on Heroes Have Hormones: More Lessons from the Harry Potter Series Principle Three: perfect heroes are uninteresting ones