Chekov’s Gun: More Lessons from the Harry Potter Series Principle Two: Chekov had a gun; Trelawney had a prophecy

This blog is part of a series. For part one, click here.

This week we’re talking about Harry Potter. No, not the much-anticipated book that’s releasing next week (although I, for one, already preordered it.) We’re talking about the books that started it all, and the lessons that authors can apply in their own Works In Progress.

Principle Two: Chekov had a gun; Trelawney had a prophecy.

Being patient and letting a story unfold does not mean that a writer should hold back major plot twists until the last minute. Within writing there is a literary technique called Chekov’s gun – an element is introduced early in the story, but its significance does not become clear until later. “One must not put a loaded rifle on the stage if no one is thinking of firing it,” he wrote.

There aren’t many guns in Rowling’s tales, but readers quickly learn that seemingly offhanded comments prepare readers for unexpected revelations. Hagrid’s mentioning Sirius the night Harry’s parents died prepares readers, almost without their noticing, for the inclusion of Sirius into the story later; they have already crossed a certain barrier of plausibility about his involvement because they have known for some time that he was there.

Similarly, at the end of The Prisoner of Azkaban, Harry confides in his mentor, Professor Dumbledore, that he had a strange experience with Professor Trelawney, the Divination teacher whose ability to read the future is often in doubt. “Who’d have thought it?” says Dumbledore. “That brings her total of real predictions up to two. I should offer her a pay raise.” And the conversation moves on.

It seems, at first, like a throwaway phrase, a dry way for Dumbledore to accept the prophecy without exciting an already worried Harry. Until two books later in the Order of the Phoenix, we learn that Professor Trelawney’s first genuine prediction was the event that pitted the villainous Lord Voldemort against Harry Potter. It’s a shocking plot twist, especially since her character comes across most often as a fraud. But readers will remember the seed planted by Dumbledore. “Why yes, we heard something about this before. It all makes sense…” (Dumbledore is often the source of Rowling’s foreshadowing. Remember the Yule Ball in The Goblet of Fire, when Dumbledore chats amicably about how he was on his way to the bathroom when he stumbled across “a beautifully proportioned room I have never seen before, with a really rather magnificent collection of chamber pots”? That was the readers’ first introduction to the Room of Requirement.)

What’s the right time for an author to drop in bits of foreshadowing like this? According to Chekov, it must be done early. But the best hints are those made in natural places – when a character in conversation would have a reason to bring it up (like someone asking him, “Where did you get that flying motorbike?”), or someone would be in the right place to notice an object lying on the table, etc. Whatever will help the reader understand that this has been the plan all along, and it was right there in front of them. 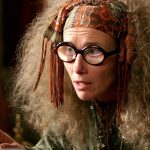 Foreshadowed elements may come up naturally as you write a draft, but typically these are subtle clues planted during the revision process, once you have worked out the ultimate conclusion. Once you know what you are looking for (that the man in the diner is really your hero’s father, or that the killer is really the supposedly-dim-witted brother), go back through your story and look for places where the surprise might intersect with your story.

Do you have other favorite example of Chekov’s gun, either in the Harry Potter series or in another work of fiction you’ve read? Share them on our Facebook page! The more examples we have, the better we will be able to recognize it in our own works.

By Editorial Department|2021-05-12T16:37:40+00:00|Fantasy, The Writer’s Craft, Trends|Comments Off on Chekov’s Gun: More Lessons from the Harry Potter Series Principle Two: Chekov had a gun; Trelawney had a prophecy