Skip to content
Home/RDB, The Editor’s Craft, The Editorial Process/What Editors (Really) Do
Previous Next

What Editors (Really) Do A guide for authors, by Editorial Department founder Renni Browne 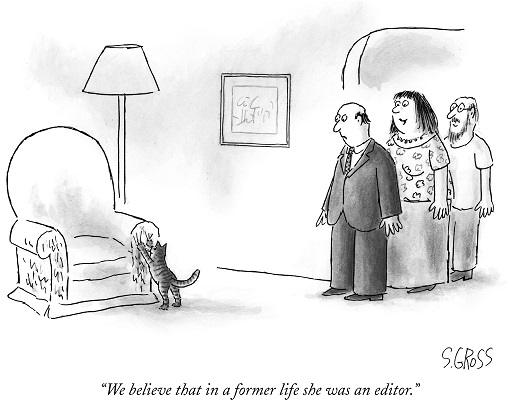 So in one of my favorite New Yorker cartoons by Sam Gross, we have a cat maniacally clawing an upholstered chair, obviously not for the first time, and its owner explaining to her guests: “We believe that in a former life she was an editor.”

Over the fifty-plus years I’ve been an editor, I’ve met plenty of people who think my job is to tear writers’ manuscripts to shreds. Other people think I correct spelling and punctuation and grammar, catch typos, and make sure that if the heroine began an evening wearing a blue sweater it hasn’t turned green by the time she comes home.

It’s not surprising that confusion about what editors do abounds, because we do a lot of different things and we never do them the same way—every manuscript is different, every writer is different, every story or nonfiction subject is different. What stays the same is the purpose of the editing: to help the author make the work as good as it can possibly be. So good that literary agents want to represent it, publishers want to publish it, and readers in significant quantities want to read it.

Developmental or conceptual editing is what you get when an editor critiques your manuscript. If it’s a novel, the editor should give you feedback about your plot, characters, and writing style, and at The Editorial Department that feedback includes specific suggestions for improving anything that needs strengthening in these areas. If your manuscript is nonfiction, the feedback will focus on the impact of its content, its clarity and conviction, the flow of ideas, and the effectiveness of the writing style. You might say that developmental editing addresses the forest.

In line editing the editor gets involved with the trees, line by line, and I’m not just referring to comma faults and misspelled or misused words. Just as developmental editing helps you make the book’s content as effective and appealing to the reader as possible, so line editing helps make your writing style as consistently effective and appealing as possible. A gifted line editor can do more than that. He or she can bring out the author’s voice. And a distinctive narrative voice gives writers a real edge when they’re trying to get a literary agent, or their agent is trying to get them a publisher.

Good line editors never impose their own style on the manuscript. If we make a change in wording, it sounds like the author at his/her best, not the editor. The changes we make are, in fact, inspired by the author’s writing. The idea is to make all of the manuscript read as well as the best parts read. Think about what a difference this can make in the overall impact of an entire book.

We often annotate our line editing, query a change rather than going ahead and making it, or explain why we’re making a change. Whether or how much we annotate for our clients depends on the relationship and arrangement with the author. We also sometimes prepare a self-editing memo in which we edit and coach the author extensively through a portion of the manuscript in order to empower him/her to line edit the rest without our help.

They’re too close to see everything. Your manuscript is your child, and who among us is capable of 100% objectivity about our own children? I’m certainly not. I wouldn’t dream of writing anything for publication without having it critiqued by at least one of our editors and the final draft line edited.

Another important kind of editing is copy editing, which corrects punctuation, typos, incorrect grammar (unless intentional, as in dialogue), inconsistencies (right down to capital letters and hyphens), errors, misspelled or misused words, unintentional word repetition, and so on. Copy editing is highly skilled work, but it’s substantially different work from line editing.

The first chapter in Self-Editing for Fiction Writers is about showing and telling, and “show, don’t tell” is probably the single most oft-repeated and most valuable piece of advice handed out to writers. (Although, as Dave King and I make clear in the book, telling does have its place.)

I follow my own advice, so with the author’s permission, I’m going to open a window on the editorial process with my editing of a first novel originally titled Blue Notes from Babylon, by a fine writer named Mark Ziebart.

Mark sent his haunting story about a young musician who along with his black partner gets entangled with a beautiful schizophrenic to The Editorial Department for our most popular initial service, a $.01-per-word Manuscript Evaluation that addresses plot, characters, and style with specific recommendations throughout. Three of us read the manuscript and commented: myself, my gifted assistant Shannon Roberts, and Ross Browne, who in addition to running The Editorial Department plays guitar, sings, and writes country songs for a blues band on the weekends. I wanted his take on Riley since Mark’s protagonist is a country singer/songwriter hooked on the blues. Ross came up with suggestions that helped Mark turn a good character into a character who stays in the reader’s mind long after the story is over.

In the meantime, Shannon and I combed the manuscript for opportunities to increase the story’s impact on the reader. (They lurk within virtually every story if you know how to look for them.) For example, we helped Mark find the arc of scenes that were almost powerful, so that they built and resolved—or kicked the reader forward. We made suggestions for ramping up or exposing the conflict between characters, because conflict is what drives fiction. And so on. When the next draft came in it was deeper, richer, more exciting, more suspenseful. I let Mark know how excited I was with the way Blue Notes was coming along.

This is another part of the editor’s job: encouraging the author, letting him/her know when revision is going particularly well, and why. E-mails and telephone calls also served to brainstorm editorial questions from time to time. I meant every encouraging word. Blue Notes from Babylon was very good when it came to us, but a manuscript that’s likely to break into today’s super-tough market for first fiction needs to be good enough to blow the socks off literary agents, publishing editors, and ultimately its readers. Mark had to do a lot of hard work, and he needed his editor’s support along the way. We went through two and a half drafts, with considerably less work needed each time around. I told Mark that writing a novel is a process, not an event. At some time during the process I suggested a title change, recommending Riley’s Blues over Blue Notes from Babylon as more appealing. Mark agreed.

Little changes over the course of an entire book can make a big difference—to the quality of the work, even to its fate in the marketplace. Line editing used to be provided by editors at publishing houses but seldom is today. Nowadays, if your manuscript needs editing it gets rejected—most likely by the literary agent who could place it in the hands of publishers.

Agents and publishing editors want manuscripts that are edited before they lay eyes on them.

But there’s another way to look at it. The writing of any author who receives line editing is going to be strengthened in the process. Over the course of our work together, Mark went from being a good writer capable of breathtaking moments to being a writer whose entire final draft left his editor breathless. The distinctive narrative voice held up all the way through a story you can’t put down, spun out in prose imbued with the exhilaration and heartbreak of Riley’s music all the way through.

At the end of the day, what editors do is make writers better at what they do.

Looking for developmental, line, or copy editing for a manuscript you’re working on? The Editorial Department has a highly experienced staff of freelance editors who provide expert support with a wide range of genres. Please contact Ross Browne in the Tucson office for more information.

By Renni Browne|2022-02-21T19:31:14+00:00|RDB, The Editor’s Craft, The Editorial Process|Comments Off on What Editors (Really) Do A guide for authors, by Editorial Department founder Renni Browne

About the Author: Renni Browne

Renni Browne has been an editor for over fifty years and founded The Editorial Department in 1980. She is even better known as the coauthor of Self-Editing for Fiction Writers, its first edition published by HarperCollins in 1991 and still a best-selling craft book for writers. Interested in working with Renni as your editor? Please click here.