Evaluating Nonfiction: One Editor’s Approach What can set your nonfiction manuscript up for success ... or doom it to the reject pile

Fiction lives or dies by the author’s storytelling and writing skills (and perseverance and some luck). For nonfiction, then, one might assume that likewise, an interesting topic well elucidated will do the job. However, the publishing industry and readers regard nonfiction a bit differently.

Publishers generally have certain prerequisites for even considering a nonfiction project. The first of course is whether the subject matter has a market. In other words, they have to think that enough people who can part with the price of a book can be made sufficiently interested in the material to do so. The definitive tome about the physiology and behavior of the Andalusian Dwarf Forest Vole may be a masterpiece of natural history, impeccably accurate and beautifully written, but how many copies can a publisher expect to sell? Before taking on a nonfiction project, writers, agents, and publishers must consider this question and use any available information to arrive at a good guess.

Publishers will also ask about the author. Is he qualified to write such a book? Do his education, standing in his profession, and track record make him an authority to whom people will listen? If not, you’re probably in trouble, for potential readers usually want some prima facie evidence that the author knows what he’s talking about before they’ll plunk down their money to listen to him. To be blunt, a lack of credentials—renown, degrees, previous books, professional success in the field—can be a great barrier to attracting an agent or publisher to a nonfiction project. Big-name endorsements can help fill the gap, if you can get them.

Literary agent and former HarperCollins editor Robert Wilson had this to add:

What’s a platform? A platform is your network, your accomplishments, your place in the world, your degree of notoriety among the general public or a specific market, your previous media and/or target market exposure…all of which become your publicity and sales angle that a publisher expects you to have so you can promote your book and reach out to your target readers with little help from the publisher. An offshoot of this is media contacts. If an author has contacts in the media, it’s a big plus.

Ironically, those authors with the best platforms – big celebrities – get the most promotion from their publishers, even though those celebrity authors really need the least help. It didn’t used to be this way. Platform as the determining factor in getting published is a recent phenomenon that grew in the ’90s and is now firmly in place. 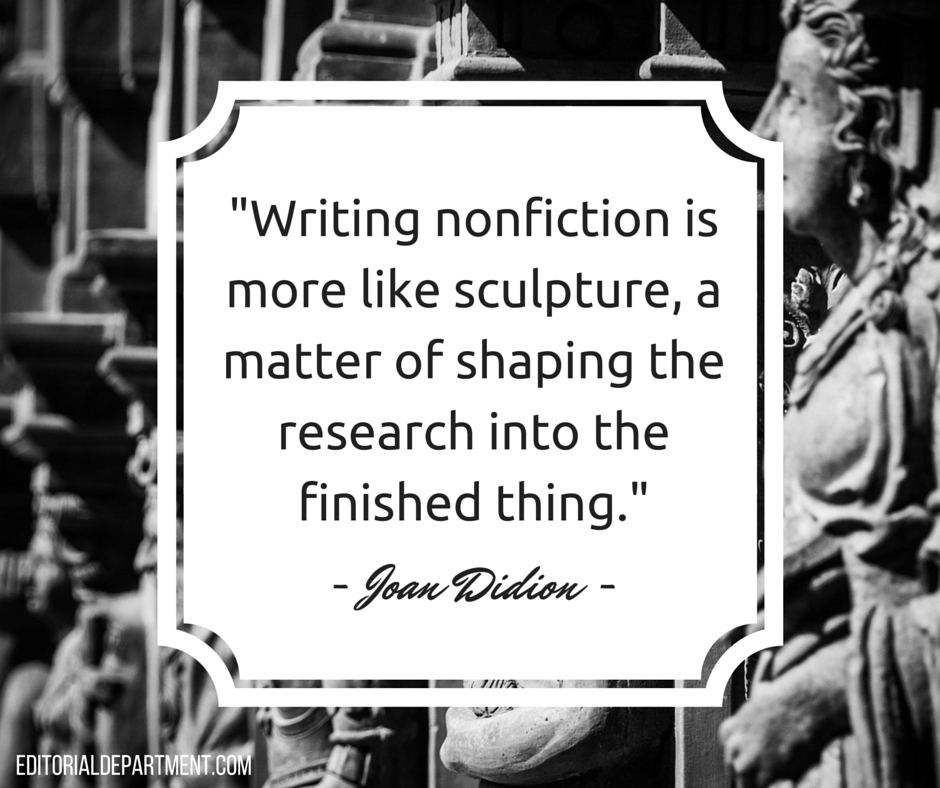 Obviously, the subject of the book must be covered thoroughly and accurately. I’ve seen a number of nonfiction manuscripts by experts in their subject (but not necessarily in writing) who simply start typing, and out pours page after page of information—in no particular order, with lots of repetition, backtracking, “as I will show,” and “as I have already said.” Subject matter needs to be arranged so that it is:

– Sorted in a manner that aids in its understanding—perhaps by chronology, sequence of action, complexity, logical deduction, etc.

This usually requires much thinking and planning ahead of time. Most nonfiction authors outline before writing.

Often an agent, publisher, or reader will flip to the table of contents, and if it doesn’t clearly and almost instantaneously provide a lucid, engaging overview of the subject, that may well be the end of the line.

Deathless prose may not be as important in nonfiction as in fiction, but good writing is still a significant asset. The text should be clear and easy to understand. The idea isn’t to sound smarter than readers but to communicate the subject effectively to them. Use precise, unambiguous words and phrases. Define any specialized terms you introduce. Keep the syntax appropriately easy to navigate.

The prose should also be competent—meaning grammatical, correctly spelled, and properly punctuated. Sloppy prose suggests the writer is careless or uneducated, which throws doubt onto the entire work. Hire a copyeditor if necessary.

The prose in some nonfiction comes across as dry and clinical, precise but colorless, as though the author believes an aloof, impersonal tone is proof of authority. But a stick in the mud isn’t necessarily more knowledgeable and respected than a firebrand. In fact, most bestselling nonfiction has an engaging voice and a lively style. Think back to school: from which teachers and professors did you learn the most and gain an appreciation of the subject, the monotonous ones or the impassioned ones? This doesn’t mean the ms should be full of gimmicks and jokes, only that the writing should implicitly convey the author’s excitement, passion, and even love for the subject. This may simply involve using a less formal, more conversational style.

Because of its emphasis on narrative and storytelling, memoir is a special case of nonfiction that falls somewhere between fiction and nonfiction. While some memoirs can thrive solely on the basis of a terrific story and great writing with the added allure of its purported factuality, the genre also has some big caveats.

Whether in a memoir, journal, or autobiographical novel, authors writing about themselves face a very difficult problem: distinguishing how much of their fascination with the topic stems from its intrinsic interest versus the mere fact that it happened to them. You can get all caught up in the narrative of your own life, but is it really a terrific story? For example, the seminal events of your youth—e.g. first love, bumming around the country, a struggle with drugs—may seem old hat to others. As Dennis Hopper says in the black comedy Search and Destroy,

“Just because it happened to you doesn’t make it interesting.”

Life isn’t often very good at providing fully developed, structurally sound stories, which is one reason we have novelists. The events and characters from your own life might be better used as raw material to be reshaped and adapted to a novel.

Much memoir that actually gets published is by or about famous people, provides eyewitness accounts of historic events, or gives an insider look at current issues, such as living with AIDS or breast cancer, growing up gay, or being Muslim in post-9/11 America. In other words, as well as telling a story, it fulfills the nonfiction function of providing factual information about our world.

There are exceptions, of course. Frank McCourt’s Angela’s Ashes may appear to be one—an account of his childhood by a relative unknown. But on closer look, the book is more than simply a good story well told; it also explores three evocative subjects that strike a chord in many of us: the Irish-American experience, living in abject poverty, and growing up with an alcoholic parent.

A special case is memoir that succeeds as comedy by being hysterically funny—a sort of factual joke book or true-life sitcom. A book that makes people laugh can get away with just about everything else. But simply adding some humor to a memoir doesn’t do the trick. To work primarily as comedy, a book needs to consistently provide several out-loud laughs per page. A wry look at a time in one’s life or a quiet chuckle here and there isn’t enough to make it on its comic legs. David Sedaris’ Me Talk Pretty One Day is a very successful, witty, laugh-out-loud memoir that fits into this difficult sub-genre. Sedaris has gone on to write many well-received books in the same vein and developed an almost cult following.

A novel almost always requires a completed ms, while nonfiction is usually presented as a book proposal. In short, a book proposal briefly presents the basic idea of the book, the author’s qualifications, the book’s marketability including comparable titles, and an outline and a sample chapter. (For detailed instructions, see Michael Larsen’s How to Write a Book Proposal, fourth edition.)

Literary agent William Clark points out that the proposal in most cases is actually more important than the eventual manuscript. It must be clear how a book will add to or change the popular interpretation of its subject, or, at least, how it stands out from the other books on the same topic.

The proposal must anticipate an editor’s asking “so what?”

A great many important publishing decisions are made long before a complete manuscript is delivered–design issues, catalog copy, tentative marketing, advertising, and publicity budgets are all often determined on the basis of the proposal, and the sales force will estimate advance orders and the first print run as well. It is really a business plan for the publication of the book.

The proposal may be viewed as a convenience for busy agents and publishers, but it’s also a boon for writers. It allows them to float various ideas without having to write the whole ms, and if it sells, it provides an advance to help tide them over while they write it. Although writers sometimes complain about an agent or publisher messing with the pristine brilliance of their creation, nonfiction can be a somewhat collaborative process, and agents and publishers often have good ideas for improving the book described in the proposal—additional material, streamlined organization, or a way to adapt it to a wider audience. Isn’t it nice to have those suggestions before you actually start writing the book?

Looking for guidance in making your nonfiction manuscript more dynamic, memorable, and publish-worthy? We have editors on staff who specialize in memoirs, biographies, and a wide range narrative nonfiction topics. Please contact Ross Browne  at the Tucson office for more information.

By Peter Gelfan|2022-02-21T18:11:32+00:00|Developmental Editing, Getting Published, nonfiction, PG, The Editor’s Craft, The Editorial Process, Traditional Publishing|Comments Off on Evaluating Nonfiction: One Editor’s Approach What can set your nonfiction manuscript up for success ... or doom it to the reject pile