Twilight, A “First 50” Review A review of the first 50 pages of Twilight, by Stephenie Meyer

The first 50 pages of Twilight make for what I would call a mildly interesting read.

The novel opens with a preface of a half page in which an unnamed narrator writing in the first person contemplates the fact that she’s about to die, presumably at the hand of an also-unnamed ‘hunter.’ What’s interesting here is that the narrator doesn’t seem too upset that she’s presumably about to be killed. She confesses to not regretting the decision that led to her being here and then the preface ends with the hunter ‘sauntering’ over to kill her.

In the first of the two true chapters that comprise Twilight’s first 50 pages, we learn that the narrator of the book is a high school senior named Bella who hates rain and who is moving to the rainiest city in the US, a little town called Forks, Washington. Her folks are divorced and she’s moving from her mom’s place in Phoenix to this gloomy town to get some quality time with her dad. She doesn’t really want to do this, and does it perhaps more out of a sense of duty than pleasure. Either way she’s going and does not expect to enjoy it. Yet she doesn’t seem at all conflicted; she’s determined to do what we can only gather she thinks is the right thing for some reason that isn’t fully explained in these pages.

There’s something mysterious about Isabella Swan, and it’s a good thing too because not much really happens in the first fifty pages.

She flies from Phoenix to Forks and immediately enrolls in school. Most of the narrative—Bella’s point of view, written in the first person past tense–focuses on her settling in. She’s the new girl in a small town of locals so this isn’t easy, but there’s not much drama in her day-to-day. She’s a quiet, shy, rather reserved person who’s obviously smart and seems strangely detached from the world around her. She’s not gregarious or outgoing, yet seems to make friends easily enough. You might say she seems happy to be unhappy. 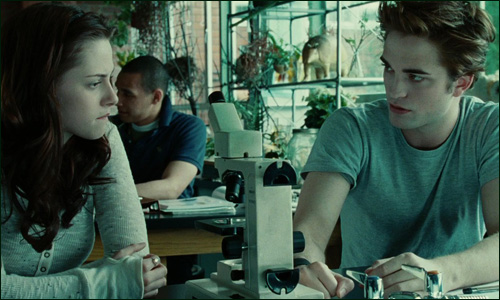 Bella and Edward in Biology class

Chapter One (FIRST SIGHT) chronicles her first few days in this little town, which is a pretty humdrum day-in-the-life of a new student type stuff except for her interest in this striking young man who seems to take an instant and intense dislike to her before they exchange even a single word at the biology table they share. She’s troubled by this, in part because he’s so incredibly attractive and unusual looking and in part because she just can’t make sense of it. The tension here is really the only element of mystery present in the first 50 pages and the only thing that gives the story any kind of definition in terms of plot beyond the preface, which now appears to be a kind of flash forward.

In chapter two (OPEN BOOK)  Bella again sits next to the mysterious Edward Cullen, but this time he’s very nice to her. By this point readers have learned that he’s one of four adopted children—all strange looking, all strikingly beautiful, all outcasts in the school—of a gifted doctor who could be making a bunch more money working somewhere else. Bella’s dad, a local cop, is uncharacteristically verbose in singing the family’s praises and Edward himself seems smart and genuinely decent, though also a bit strange and withdrawn. He makes no explanation of his initial reaction to Bella and she doesn’t ask. They have a much deeper conversation than she has had with any of the other kids at the school and she’s puzzled by his incredibly cold hands and luminescent eyes. Chapter 2  wraps up on page  52 with Bella seeing Edward laughing, out by his Volvo.

While there’s plenty of modestly interesting stuff happening here, the charms of this opening are very subtle.

If it weren’t for what’s revealed by the flap copy–that Cullen is a vampire and that Bella will fall in love with him–I doubt I would have stuck with it.

Bella is interesting and somewhat likable, and the book does pique some curiosity about why Bella has really chosen to come here and what the deal is with the Cullen family, but it all strikes me as pretty low-octane.  Take away that preface and it may be just too ‘whateverish’ to really have a good chance of engaging most readers on its own merit.

There’s not a lot of conflict, not a lot of suspense, and just not much happening that feels all that book-worthy.

Despite some amateurish mechanics, Stephenie Meyer is a competent enough writer. Despite the absence of an easily identified plot, there is something compelling about the opening. Though part of my motivation to keep reading may have stemmed from this author’s incredible commercial success, her first two chapters did make me want to find out where all this was going.

In the end, I decided that this is a book that’s become remarkably successful despite, not because of, an opening fifty pages that could fairly be called slow. I’m pleased to report that things did get a lot more interesting after chapter two, right about page 55.

Looking for guidance in making sure your first 50 pages are attention-grabbing? Need to make your characters more dynamic, memorable, and book-worthy? We have editors on staff who specialize in helping authors with character development, dialogue, and strengthening character-based subplots.  Please contact Ross Browne at the Tucson office for more information.