“In his first novel since The Corrections, Jonathan Franzen has given us an epic of contemporary love and marriage. Freedom comically and tragically captures the temptations and burdens of liberty: the thrills of teenage lust, the shaken compromises of middle age, the wages of suburban sprawl, the heavy weight of empire. In charting the mistakes and joys of Walter and Patty Berglund as they struggle to learn how to live in an ever more confusing world, Franzen has produced an indelible and deeply moving portrait of our time.”

Freedom is one of those books that I sat down to read with the highest of hopes. I loved the title. I liked what I’d heard about The Corrections. I liked the flap copy and loaded the novel onto my Kindle hoping that this was one of those books that would hold me spellbound from page one and take no more than a day or two to get through so I could get back to this infatuation I have going with the talented (but sometimes maddening) Henning Mankell.

While I wouldn’t say that I was outright disappointed by Freedom as a story, I was surprised by it, and not entirely in a good way.

Franzen is an intelligent and very engrossing writer, whose insights on human nature I quickly came to enjoy and value. But Freedom to me in some ways felt too much like a vehicle for his thoughts and observations and too little like the gripping story I had hoped for. That said, it’s a very interesting book, in part because of the ways it manages to entertain and engage while going against the grain of many solid points of novel craft. 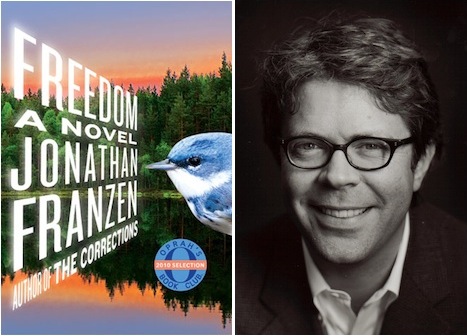 Good stories are usually built around effective plots, right? Which usually work because they give readers a strong stake in a given outcome or resolution and at the very least make us want something reasonably specific. But what’s there to want–to anticipate, positively or negatively–in Freedom? What outcome is there for readers to rally for or against in the experience of the book as a whole?

Well…it’s complicated. The book shifts around a lot–in focus, in viewpoint, and at points into an unusual narrative framing device of an (auto)biography within a third person narrative–and while it’s all done very assuredly, this has the effect of keeping a traditional overarching plot at bay. There were moments when as a reader I did want something to happen (or not happen), but these were isolated and usually quite fleeting.

For most of the book, I wasn’t sure what the author expected me to want or who to want it for. Yet I kept reading…

Fine, okay, this is the way it goes in mainstream fiction sometimes. So then there’s the sometimes dysfunctional, occasionally despicable, but admittedly never boring cast of characters. Who can readers rally for? In the early going, the answer is just about no one. I mean, Walter is a good enough guy and all but he’s almost exasperatingly boring until later in the novel–at least in contrast to everybody else.

Patty is interesting and sympathetic to a degree, but she’s a very passive character in many respects (at least off the basketball court) and someone that I still haven’t decided how I feel about. The strongest feeling I have for her is pity, and that’s no compliment. Joey is probably the character who surprised me most, but it took several hundred pages before I was really invested in his story.

Richard is interesting in some respects, but I was never quite convinced by him and thus never particularly concerned about what happened to him. He felt made-up to me – more like a figment of the author’s imagination than a living, breathing person. His role in the story is quite brilliantly conceived, but Franzen’s handling of him as a character left much to be desired for this reader.

There may not to be a lot to love about the characters here as people, but the way their lives are entwined is imaginative and at times quite memorable.

There’s a great depth of interesting but not always convincing characterization in this novel. I found the cast fascinating, but I also found sympathy for the characters very slow to build. And from pretty much the very first page, their story–individually and collectively–made me sad more than anything else. Freedom is in some ways a very depressing book. Yet I kept reading…

Finally, there’s the style of the novel. Franzen strikes me as a blazingly intelligent writer who has some frustrating limitations as a stylist. Much of his narrative falls a little flat to me. His dialogue is always engaging but not particularly distinctive in its own right. Many of his characters speak in the same voice, and with little of the flavor of the region they come from. And boy, can they natter on about stuff. But for whatever lack of artistry in his dialogue and even his narrative prose style, there are some extraordinary scenes in the novel that I’ll never forget and there are passages that just about take the breath away.

Franzen discusses Freedom on the Oprah Show, after it was chosen to be part of Oprah’s Book Club

So this all leaves me wondering…Here’s a book that’s surprisingly engrossing (and obviously quite successful) despite not measuring up particularly well to some standards of fiction craft that I really value. For all it has going for it thematically and the way it pokes at our ethical, cultural, and environmental sensibilities, this is a book I wanted to love and just couldn’t. It’s the kind of book I think could have been brilliant, but ended up merely imaginative and thought provoking without quite living up to its full potential. (See our blog on “Everyone Needs An Editor” to get a glimpse of how even established authors need editors to help them with craft standards and how, quite often, previously successful authors get away with more than they should.)

So now it’s back to Inspector Kurt Wallander and the often dreary but never boring world of his that I can’t seem to get enough of.

Looking for guidance or feedback? Need to make sure you aren’t *this* close to finishing a project that could, with a professional’s eye, be absolutely brilliant? We have editors who specialize in everything from plot architecture to character development, world-building to dialogue that sparkles. Please contact Ross Browne at the Tucson office for more information.