Five Great Storytelling Lessons from Harry Potter Principle One: Plant the seeds early, but plant them loosely and let them grow

This year- and possibly for years to come – everyone will be talking about The Boy Who Lived and his son, Albus, the main protagonist of the new 2016 addition to the Harry Potter series. In anticipation of the (unexpected) new addition, Harry Potter and The Cursed Child, I decided to re-read the entire series, all 3407 pages (in the Bloomsbury editions) spanning seven books. It’s hard to believe it’s been nineteen years since we first met Harry Potter, the wizard hero of J.K. Rowling’s epic series. I found not just a captivating, imaginative story in the original novels, but lessons in great storytelling applicable to all writers who are creating novels of their own.

We’ll explore five ideas over the next few days, and look for applications to your own writing.

Principle One: Plant the seeds early, but plant them loosely and let them grow. 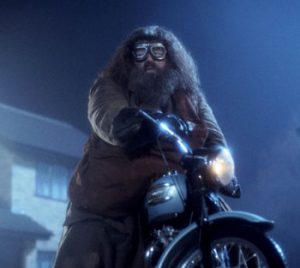 Hagrid on the borrowed motorbike

“Young Sirius Black lent it to me,” says the giant Hagrid on page 16 of the first book, as he gets off Sirius’ flying motorbike with infant Harry. Who is Sirius? Rowling doesn’t say, and he is not mentioned or seen again until the third book, when readers discover how important his role really is. The events of that first night are pivotal to the entire series, and Rowling must know she will come back to it time after time. It is to her credit that she doesn’t give in to the temptation of so many debut novelists, who let their characters practically jump up and down and shout at the reader, “Pay attention to this detail! It will be important later!” Imagine if, instead of concentrating on the events happening in front of them, she had stopped the action for Hagrid to explain. “Young Sirius Black lent it to me. You know, Harry’s godfather, the renegade son of the old wizarding family who live in London. He looked very upset about what happened, but that makes sense. After all, he’s been friends with Harry’s parents since they were all students at Hogwarts together.” The action would come to a screeching halt while the reader processes the history of a man they have not yet met.

Instead she plants the seed – Sirius was there when Hagrid found the baby-and moves on with the story, patiently waiting until events offer the opportunity to explore who this character is and why his presence is significant.

Patience is a hard lesson for writers, especially when we are introducing new characters, because we want our readers to understand as much as we do, and that includes character motivations and backstories. But in real life, we don’t usually discover everything about our acquaintances the first time we meet them. Building a relationship involves the gradual art of uncovering experience and story. And one of the pleasures of reading is the gradual uncovering of layers, and the only way to experience that is if the writer holds some details back.

In your own Work In Progress, find a section where you introduce an important character – but not your protagonist – for the first time. How much information do you share with your reader right away? How did you decide what to leave out? Share yours on our Facebook page! The more examples we have, the better we will be able to improve our own works.

By Editorial Department|2021-05-12T16:38:07+00:00|Fantasy, The Writer’s Craft, Trends|Comments Off on Five Great Storytelling Lessons from Harry Potter Principle One: Plant the seeds early, but plant them loosely and let them grow