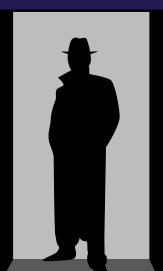 All of these are elements in any good mystery. And all of them should be elements in your novel—whether it be science fiction, literary fiction, family or historical drama, horror, romance, or something else entirely.

Any good story is driven by QUESTIONS, the most important being: What do the protagonists want? Why can’t they have it? Then there’s the villain—what drives your antagonist? If there’s a MacGuffin, who will find it—and how? Why did the brother do that? What is the secretary hiding? And so on.

This gets us to MOTIVE. It isn’t just for cops and crooks—it’s for every character in every story. All of your characters have (or should have) interesting motivation for what they do, and often those motives are mysterious to the reader. Wanting to figure them out or understand them is part of what keeps us reading, so you want to keep at least some of your characters’ motives hidden. Your protagonist, of course, needs to be highly motivated—and being a hero or a heroine is not a motive.

Protagonists should have a personal stake in events of the story—they or someone close to them is in danger or vanishes, something of great value to them has been lost or stolen, a horrific secret needs to be uncovered or kept secret. Such stakes most often show up in mysteries, but the principle is just as important for fiction in other genres. Make the stakes high and personal for your main character.

On to CLUES—how they work and why you need them.

Take a look at this potential scene:

Isobel, your protagonist, inherits a locket she can’t open. Her only living relative is old Aunt Edna, so naturally she turns to her for information. Aunt Edna explains that it’s a magical locket with the spirit of an evil relative trapped inside–Isobel shouldn’t open it.

And…that’s it. We aren’t required to figure anything out, we’re just handed the explanation—readers don’t get a chance to put anything together.

Readers are more engaged in a story when they speculate about how something that happens will resolve—or how the story as a whole is going to resolve. For readers to be able to speculate, you need to give them clues.

So let’s revise our sample scene:

Isobel inherits a locket she can’t open. Her only living relative is old Aunt Edna, so naturally she goes to her for information. As it turns out, all Aunt Edna remembers is that her sister acquired the locket shortly after another death in the family—a relative everyone deeply disliked.

There’s plenty here to keep readers speculating, which in turn keeps them engaged. And of course, as the protagonist pursues these clues, the story moves forward. Clues are like signs: they should always point the way forward.

Of course, that’s the way clues should work. But often writers worry that a clue may be too obvious, so they try to obfuscate things. You want to avoid this strategy and instead rely on RED HERRINGS. Again, these aren’t just for mysteries—they’re for any story where you want to keep the reader guessing. All clues should point to something, but that something isn’t always what the protagonist wanted or needed to find.

Some authors don’t like this approach. Isn’t it misleading the reader? If the protagonist spends hours or days chasing down a bum lead, won’t everybody just feel as though they’ve wasted their time?

A red herring should lead us away from our goal, but it can also lead to a different, legitimate clue. Maybe we learn something that causes us to re-evaluate what we thought we knew. Readers only feel their time has been wasted if the protagonist comes away entirely empty-handed. So long as the characters grow, learn something (about themselves or the story), or the situation changes, our time hasn’t been wasted.

Of course, mysteries don’t just happen—events are always set in motion by something or someone, and that someone is generally the VILLAIN.

We talked earlier about the protagonist needing a personal stake in the story. This applies to the antagonist, too. It’s easy, when you’re writing any story, to find yourself on the side of your protagonist. After all, you generally want your hero or heroine to succeed. Unfortunately, this can mean short-changing your villain. The antagonist should always have a clear motive, even if the protagonist doesn’t know for quite a while what that motive is. In a true mystery, the villain’s motive is often at the center of the plot—once you can identify a motive, you can usually identify the miscreant. While your villain’s motive may not be central to your plot, it behooves you to think carefully and come up with something plausible, a motive with substance.

So you’ve got your elements—a hero or heroine, a villain, questions that need answers, clues, red herrings, and plausible motives all around. But how do you draw it all out? How do you answer some questions but keep the reader engaged until the final page?

The answer is SUSPENSE.

What’s suspense? The master of suspense, Alfred Hitchcock, described it more or less like this:

Suppose two people are sitting at a table having a perfectly ordinary conversation. Now suppose that underneath the table is a bomb, and only the reader is aware of it. The reader knows, and that creates tension—the characters don’t know, and that creates suspense.

Suspense is merely an extended state of being aware of a dramatic situation–but not yet knowing how that situation can or will be resolved. Your job, as a writer, is to create a constant state of suspense—which means chaining together a series of smaller suspenseful scenes that sustain a sense of tension and drama over the course of an entire novel.

Take a romance novel. Ted meets John, falls in love, both families disapprove. Ted decides he needs time to think about the relationship—so the next scene follows John, anxiously awaiting his lover’s decision. That’s suspense—neither the reader nor John knows how things will turn out, but we worry. They could turn out very badly indeed.

So while all these things—questions, motives, clues, red herrings, villains, suspense—are often thought of as elements of a mystery, the reality is that they’re all important elements of a good novel, regardless of genre. The more attentive a writer is to each aspect, the stronger the story is likely to be.