Often we like to imagine the (probably imaginary) good old days when editors searched for traces of gold in the rough ore of a first draft and worked with the writer to refine it. Recently, an editor at a major publisher offered a less romantic glimpse of the process. With dozens of submissions to read and all the nonliterary pressures of the job, most editors and even agents read a manuscript only until they hit the first opportunity to say no. While no doubt many gatekeepers will give you a second or third chance, why hand them even one reason to doubt your brilliance, especially near the beginning?

As a freelance book editor, I see scores of first novels every year, often accompanied by cover letters telling sad stories of rejection.  The reasons for summary rejection usually appear in a manuscript’s first dozen pages and are quite consistent.

Mistake #1: Bog down the opening with too much exposition and backstory 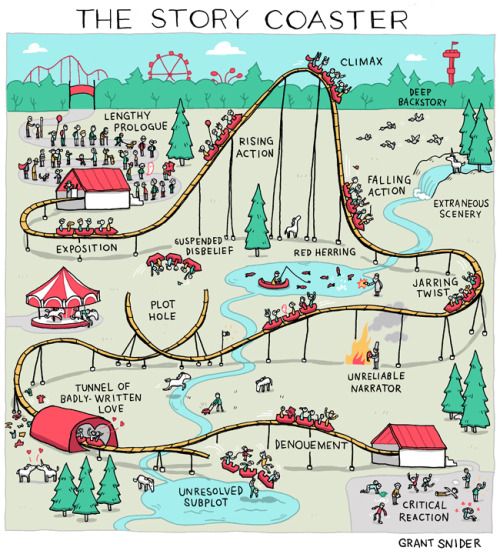 The Story Coaster by Grant Snider

For readers to get into your story, don’t they have to know the background and history of the setting, characters and events? The short answer is no. Maybe you can’t wait to conduct a guided tour of the wonderful fictional world you’ve created, but your fickle readers couldn’t care less—yet. They’re here for the story: fascinating characters in excruciating conflict. So go ahead and give it to them. After a while, they’ll get hungry for the whys and wherefores, and that’s the time to dish them out, in tantalizing tidbits.

Fiction doesn’t run on information. Its fuel is just the opposite, ignorance—better known in the biz as mystery and suspense.

For a quick test of a writer’s skill, many agents and editors flip to a passage of dialogue. Plodding, awkward, or inept dialogue flunks out. Writing good dialogue is a topic wide enough to fill a book—or several, according to the shelves at Barnes and Noble. But perhaps the biggest mistake in first-chapter dialogue is to use it as a form of exposition in which characters ping-pong scene-setting facts.

“How are you feeling today about your divorce from Jim?”

“Not looking forward to seeing him in court this morning with that cutthroat lawyer of his.”

The dialogue sounds phony because the characters aren’t talking to each other: the writer is talking to the reader.

Dialogue’s primary purpose isn’t to relay information to the reader but to reveal interplay amongst characters. Great dialogue, especially near the beginning of a novel, hints in a few words at all sorts of undercurrents, emotions, conflicts, and secrets. Leaving the reader to fill in the blanks invites imaginative participation and stimulates that most delicious of human activities: guessing at what other people are really up to. 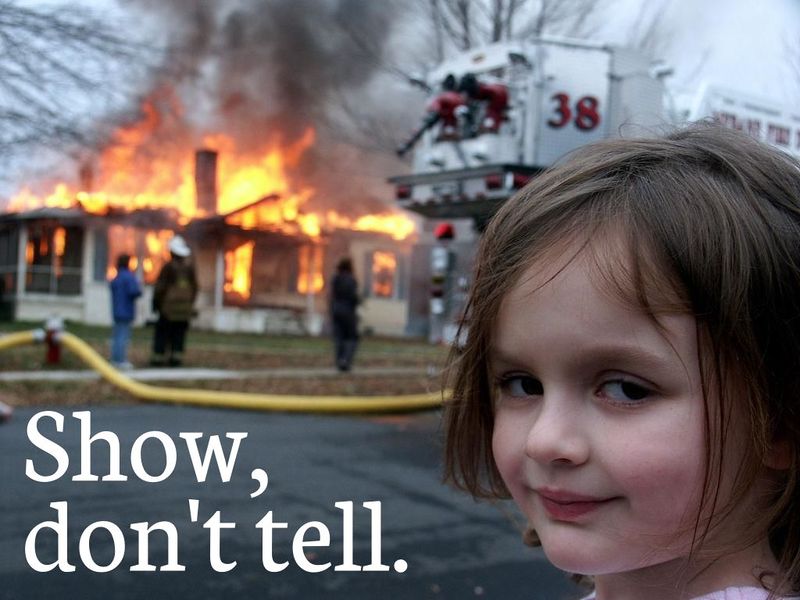 Ah, the joys of interior monologue. Your heroine brews a cup of Lapsang Souchong, goes out onto the porch, curls up in the hammock and thinks about things—the past, the future, her emotions and hopes, and the meaning of events that led to her present situation. What a pleasure for the writer, who, free from interruptions, can set the scene for the novel while showing off his prose skills. A bit ho-hum for the reader, though, for after all, another word for those pesky interruptions you’ve avoided is drama.

Show, don’t tell—how many times have we gritted our teeth upon hearing that hoary admonition? Then gritted them again because it’s all too true? Often, interior monologue tells what could far more engagingly be shown. Unfortunately, such interior monologue does show one thing to professional readers—that the author prefers the easy path of telling over the exciting path of showing.

The simple remedy: again, overcome the urge toward extensive preliminary exposition, shake your hero out of her reverie, and get your story into gear.

Mistake #4: Fail to create a character we can hitch our wagon to

Occasionally, a novel can open in the midst of a riveting plot: someone discovers a corpse, robs a bank, or walks out on her cheating husband. More usually, it takes several pages or even a chapter for the plot to taxi out to the runway. So how do we hook readers right off the bat? With the other of the twin pillars of fiction, characters.

But doesn’t it take even longer to develop a character than it does to get a plot started? Actually, it should take the whole book to fully develop a character, but that’s not what we’re talking about here. In a novel’s opening, your job isn’t to help the reader understand the character but to make the reader want to understand the character—avidly enough to tag along for several hundred pages.

In too many openings, the author tries to define the main character in terms of appearance, profession, history and so forth, and ends up with a collection of traits rather than a living, breathing, compelling individual. Often a vivid scrap of dialogue or action will do the job far more effectively than a two-page résumé. 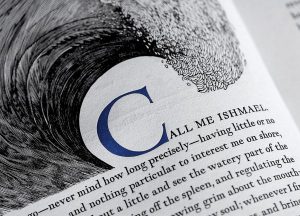 He—for there could be no doubt of his sex, though the fashion of the time did something to disguise it—was in the act of slicing at the head of a Moor which swung from the rafters. (Orlando by Virginia Woolf)

“This is the worst day of my life,” you say, as you drop a salted peanut into your double martini—on better days, you drink white wine—and watch it sink. (Half Asleep in Frog Pajamas by Tom Robbins).

What do these intros have in common? While relaying few facts, they make the character intriguing enough to follow into the jaws of the novel.

Your goal isn’t for the reader to say, “Oh, so that’s who she is,” but rather, “Wow, who is that woman?” After all, which reaction is more likely to keep someone reading?

Mistake #5: Make it all about you

In the black comedy Search and Destroy, Dennis Hopper plays a pop-psycho guru who tosses off advice as one-liners. One of them seems aimed directly at writers:

“Just because it happened to you doesn’t make it interesting.”

Too many first novels are just thinly disguised memoirs, and while our lives hold intense interest for ourselves, few of them can grab a reader the way well-constructed fiction can.

A writer’s strength lies not in his history but in his creativity. By all means use your own experience in your writing, but regard it as raw material—an event here, a fragment of a character there, a vivid line of overheard dialogue or a familiar setting.

Final note: proofread your submission materials very carefully. Typos and careless errors of any kind will only undermine your chances of having your work seriously considered.

Having problems finding a literary agent or looking for assistance in preparing for outreach to agents and publishers?  Contact Ross Browne in the Tucson office for more information on how our editors and traditional publishing consultants can help.

By Peter Gelfan|2022-02-15T20:41:40+00:00|Getting Published, PG, The Writer’s Craft, Traditional Publishing|Comments Off on Five Short Steps to the Reject Pile And five common mistakes to avoid if you want to land a literary agent