Skip to content
Home/PG, The Writer’s Craft/Authentic Voice
Previous Next

Authentic Voice Elements of Craft: One editor’s take on an author’s technique

They want their made-up stories to be as close to truth as possible—sort of like vegetarian meat. If they have to pick between two gritty detective novels, one by an ex-cop and the other by an MFA who has always lived in the nice part of town, you know which one most of them will carry to the cashier. Other than for pedigree patinas like book-jacket bios and publicity profiles, the main way readers judge the authenticity of an author, and therefore of a novel, is by his or her voice.

Ernest Hemingway serves as a good example. He’s generally regarded as “the real thing,” a man’s man who went to war, hunted big game, hung out in between-the-wars Paris with literary legends, had big tragic love affairs, went fishing with Fidel Castro, and exited this world on his own terms.

But his voice doesn’t depend on his bio. It permeates his writing.

I recently edited Book of Hours by J. S. Anderson. I did not know the author, his background, or what led him to write the novel. (Nor do I ask when I start to edit a novel, because I want a clean read of the story itself with no more information than readers will have.) By the time I was a few chapters into the book, I was convinced that the author had been a cloistered monk whose monastic duties included restoring the illuminations of antique manuscripts—just like his protagonist.
This is what I mean by an authentic voice. Even if readers know nothing of the author’s background, they feel they’re listening to someone who knows what he’s talking about, and that even if the story is fiction, it’s true to life.
Human beings, both individually and culturally, have a huge advantage over most or all other species in that not only can we learn from our own experiences and by watching those of others, we can also learn from others’ experiences without having to witness them. We remember vicarious experience as stories. According to Daniel Kahneman, Nobel-Prizewinning author of Thinking, Fast and Slow,

“This is how the remembering self works: it composes stories and keeps them for future reference.”

We gobble up stories not just for entertainment but to increase our store of useful experience without having to risk our lives to acquire it. Hence we look for authenticity of experience even in fiction—we want our storytellers to be the real thing.

How does a writer forge an authentic voice?

It’s a daunting subject. Some successful authors give encouragement along the lines of “After you’ve published your third or fourth novel, you begin to find your voice”—a big help for someone trying to get their first into print. “Write what you know” is a well-worn piece of advice but certainly limiting. What if you want to write that detective novel but aren’t an ex-cop? Watching endless episodes of “CSI” and “Law and Order” will probably result in a novel that reads like a rerun. Googling “writing voice” is like searching a flea market for a true gem.

So I compared Hemingway’s writing with that of my as yet relatively unknown client J. S. Anderson. Their styles, subject matter, and sensibilities are very different, yet both had strong voices—so what are the similarities of execution?

We have probably all read novels that give detailed descriptions of towns, buildings, cars, or weapons.

“Jake Snade tucked the Smith & Wesson 460XVR into his attaché case. The pistol weighed 82.5 ounces unloaded, and with a 10.5” barrel with an adjustable rear sight, it boasted the highest muzzle velocity of any production revolver on earth at 2330 feet per second. For what he had in mind, he would only need one or two of the five .460 magnum rounds impatiently waiting in the cylinder.”

The writer has done some homework, and it sounds better than “Jake grabbed his really big gun and stuck it in his briefcase,” but does it add up to an authentic voice?

Contrast it with a passage from For Whom the Bell Tolls:

“He reached over for the submachine gun, took the clip out that was in the magazine, felt in his pocket for clips, opened the action and looked through the barrel, put the clip back into the groove of the magazine until it clicked, and then looked down the hill slope. Maybe half an hour, he thought. Now take it easy.”

For me, that click brings the description of the gun into the realm of authentic experience. Even more convincing are Robert Jordan’s thoughts and feelings about what he’s about to do with the gun. Hemingway doesn’t fondle the equipment. He’s more concerned with his characters. 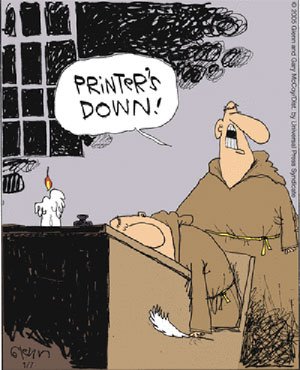 “Alphaios would himself be using quills in addition to his brushes. He knew quills were slightly curved, and that those used with comfort by right-handed scribes came from the left wings of the birds. Left-handed scribes were not unknown, but rare.

He agreed with this approach. Although modern pens could be more precise, the authenticity required of this manuscript demanded the use of quills. That, in turn, meant finding or mixing their own ink; modern ink was too thin for quills.”

Like Hemingway, Anderson doesn’t dwell on the tools of the trade but concentrates on his protagonist’s intent and how he plans meticulously to achieve it.

Authenticity seems to have more to do with the characters’ involvement in the setting and props than with the author’s factual knowledge of them.

This in itself is true to life, for a person who intimately knows, say, a town or a tool doesn’t inventory its features to himself but focuses on the immediately relevant ones and what he plans to do with them.

You may well have to do a lot of research and talk to plenty of people who have lived your characters’ lives—you’re very unlikely to get away with faking your milieu. But you can guide your research by being very specific. The question isn’t so much how a cop would track a serial killer as it is how your cop would track down your serial killer, and what’s at stake personally for both of them. When you run up against a point of fact, research that fact. Authentic characters are the heart of authenticity. They can even make fantasy and sci-fi come across as authentic: readers believe the characters and so buy into the rest.

If you can truly inhabit your protagonist and other main characters, authenticity stems from how they deal with the setting you have dropped them into and the plot you’ve thrown at them.

Looking for hands-on guidance on how to craft an authentic voice? We have editors who specialize in everything from developing your voice, to developing characters and the world of your story, to tightening up the wording in each line of your manuscript. Please contact Ross Browne at the Tucson office for more information.