Skip to content
Home/Miscellaneous/The Blackbird and Hemingway
Previous Next

In the city that draws the eye up, ever up, mine were on the commanding Beaux-Arts façade of the New York Public Library. I nearly missed the series of bronze plaques set into the sidewalk on East 41st Street, right there under my feet.

I find myself wanting to sort out the first three lines and come up with an answer. Inflections, or innuendo? But it was the fourth and fifth lines that first fired my mind. 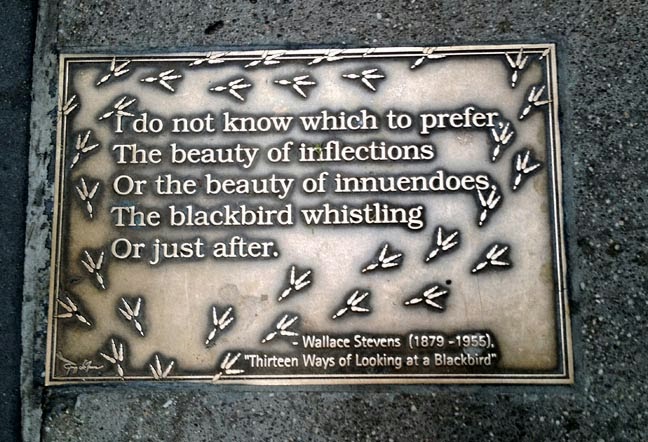 “I do not know which to prefer, The beauty of inflections Or the beauty of innuendoes, The blackbird whistling Or just after.” – Wallace Stevens “Thirteen Ways of Looking at a Blackbird”

Just after. When the music of it has passed but still rings in the ear of your mind. When it is done but you feel its effect upon your heart. The very instant you begin to apply thought to sensation.

I am a writer of fiction, and I ask myself: Does such a blackbird sing in my phrasing?  In my sentences? Is my writing musical enough, rhythmic enough, sentient enough to create such moments that may echo within the reader, even if briefly? When all is done, do my characters, do their storylines leave such reverberations as this?

The lines are from a 1917 poem by Wallace Stevens called, “Thirteen Ways of Looking at a Blackbird.” They were selected by the Grand Central Partnership together with the New York Public Library, sculpted by Gregg Lefevre, then bronzed and installed in 1998 as part of a Library Walk—an homage to the world’s great literature.

It startles me, amazes me always to find such potent observations, such insights packed so beautifully into so few words.

The sidewalk was not done with me. This time it was the author’s name that caught my eye: Ernest Hemingway. 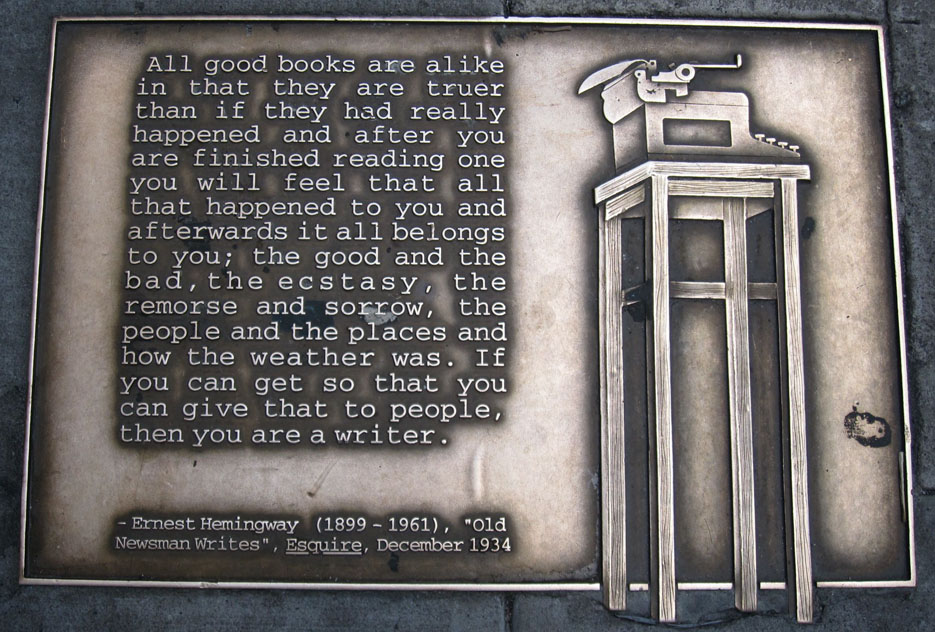 “All good books are alike in that they are truer than if they had really happened and after you are finished reading one you will feel that all that happened to you and afterwards it all belongs to you; the good and the bad, the ecstasy, the remorse and sorrow, the people and the places and how the weather was. If you can get so that you give that to people, then you are a writer.” (Esquire, Dec. 1934)

This excerpt has the feel of casual conversation; as part of a magazine article it is nowhere near as tightly constructed as Stevens’ few lines. But Hemingway, too, addresses the instant just after sensation—in this case, the reading of a good book.

Stevens speaks of moments of beauty and some ineffable sensation just after them.

Hemingway speaks of creating them.

To write to such effect takes considerable talent and perhaps even more care. But to write such moments at all, it seems to me, one must first be able to hear them. And then care enough to reflect upon them. Perhaps even wonder, as Stevens does, whether the blackbird’s song is sweeter, or the brief moment just after.

Need guidance in bringing your words to life and making them sing? We have editors that can assist you with every facet of improving your voice and your manuscript. Contact Ross Browne at the Tucson office for more information.

By Editorial Department|2022-02-15T20:38:41+00:00|Miscellaneous|Comments Off on The Blackbird and Hemingway Reflections on the nature and nurture of words